When I originally pinned this I pictured yarn wrapped letters for the wall. The pin was linked to the blog but not the specific post so I couldn't find the directions prior to attempting this. Now, when I went back to snag the link and picture for my post I was able to find it. I was initially thrown off the trail because these are actually ornaments so the title "Monogram ornaments" didn't seem like what I was looking for. I set about with only the above picture as a guide, but turns out my technique was pretty similar to hers only my product was much bigger and with a different purpose.

Luke just turned 5 last week and I always like to get portraits made around their birthdays. Like most everyone, we are trying to spend money wisely. I am the worlds biggest sucker when it comes to buying pictures and I will go in determined to spend $50 and leave spending three or four times that much.  This was my first attempt at "professional-style" pictures. I don't own a professional camera (although I dream of them. Daily.) My first step was to get a good photo prop number. I went to the craft store intending to buy a cardboard shaped number to either wrap or paint but all they had were letters. Sticking to the pin, I went and dug a good sized box out of the hubby's box hoard. I wanted it to have some stability because it was going to be manhandled by a five year old so I doubled up on the cardboard and cut two number fives. I hot glued these together and then started wrapping with some neutral colored yarn I found in the craft stash. I burned myself a bunch with the hot glue gun and said quite a few curse words but it was late and no little ears heard me.

Turns out there are tons of different techniques to get this done. Just search "yarn wrapped" for a billion different tutorials. I was happy with my final product. The hardest part were the straight corners. I thought the curved parts would be the hardest, but trying to get the whole corner covered was actually where I burned myself the most.

Beautiful, cooperative weather today and a handsome, cooperative five year old led to some results I am pretty proud of: 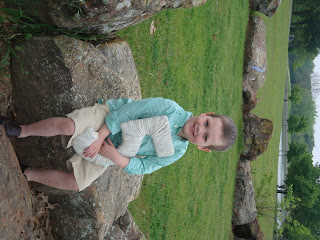 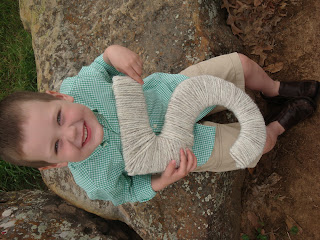 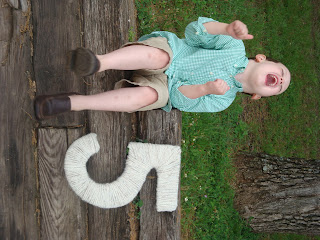 In the car on the way there big brother mentioned that if we turned it upside down it could be a 2 so we let the two-year old have a shot with it as well. You can see the glued ends on the back. 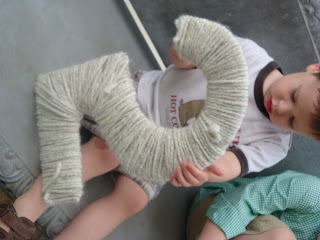 Final verdict: I love the way it looks in the pictures. It was pretty sturdy and held up for the whole shoot. We may stick it on the play room wall for an interest piece. Maybe we'll start making them for every birthday until we have a complete number set? It would be cute to have all the numbers or all the alphabet on the playroom walls. It would make cute baby pictures to make a whole set of numbers the same size and take monthly pictures with the numbers and baby to mark milestones. This has tons of possibility.
Posted by lizzy at 11:54 AM