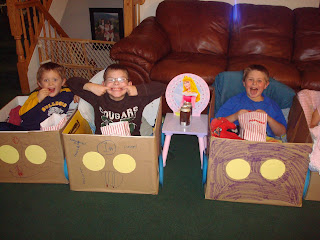 So this was actually a birthday party idea for a drive-in movie themed party. I took her fabulous party down about 70 notches.

A few weeks ago Daddy had a shipment that came in this ridiculously oversized box. When I saw it I thought perhaps he had purchased an elephant. Once the saxophone was removed from the box (y'all, I am not exaggerating. The box was nearly as tall as I am and at least three times as wide) the boys spent a good part of the next four days scribbling all over the inside and outside of this thing. I had pinned this drive-in idea a while back and since they had so much fun with one box I thought I could be a really good mom and give them each a box of their own.

This week I snagged two good sized boxes from work and stashed them away for Daddy's night out. I have a pretty big pin project I am working on for tomorrow and I had some prep work to get done today, so the boys and I went to the garage with their art bucket (still fabulous as ever) and they worked on their boxes as I did my prep work. I put the idea in their head that it should be a car, but at 4 and 2 years old, not only do they not know what a drive-in movie is, but it was going to be fun whether it looked like a car or not.


After dinner we set up their boxes in front of the TV and I padded them with blankets and pillows to make them more comfortable. Luke requested a "table" to be in between so we found a smaller box (did I mention my husband is hoarding boxes in the garage?) to serve as their table. When it came time to pick their movie, Will wanted Mickey Mouse Clubhouse and Luke wanted Jake and the Neverland Pirates so they ended up just watching shows off the DVR for about an hour.

I had promised popcorn so they settled in with their popcorn cups and really didn't move for the entire time. This was like five special mommy treats in one: 1. Popcorn. 2. Popcorn in the living room!! 3. Popcorn in the living room AND watching TV. 4. Watching TV!! (I'm a wee bit restrictive on TV time) 5. Their own comfy box. Who knew kids could be so easy to please?

Soooo... I way undershot this one as far as meeting the actual pin. No concession stand, no wheels or headlights on the "cars," they technically didn't even watch a movie.  But I still consider it a total success because they LOVED it. And later on I used the boxes to manipulate good behavior out of them, as in "Little boys who fight over toys might not have boxes in the morning. . . " (read it in a sing-songy voice).

Total time: Zero-ish minutes for me--they did all the work. Well, there was that 15 seconds it took to put the popcorn in the microwave. . . and the 1 second it took to turn on the TV... So I will revise that to : Total time: 16 seconds.

Final Verdict: I imagine the boxes will linger around for a few days and they will beg to do this again and again. It was a super easy way for me to get some of my things done as well. I still think it would be a cute idea for a party when the boys are old enough to know what a drive in is!
Posted by lizzy at 8:18 PM