As we planned our spring break pins, I let Luke pick out which super heroes we should make. He picked Flash for himself and Superman for Will. While I have nothing against recycled t-shirts, I scored some fresh new ones at Hobby Lobby on sale for less than the price of a Goodwill one.  I printed out the logos from the first pin. They were a little smaller than I anticipated and wanted. I am sure I could have blown it up but I was frustrated with my printer at the time and decided the current size would work.

Luke helped me cut the templates out but then got distracted by Mickey Mouse while I cut out the logos from felt. I teased my facebook friends with this photo this morning.

The logo tutorial suggested hot gluing the pieces together, but since I anticipate these babies making a few trips through the washing machine, I chose to sew them together. I sewed the pieces to each other like a patch, and then sewed them on to the cape.

Also, the cape tutorial called for Velcro closure in front of the cape. For Will, I figured he could better maneuver in and out of the t-shirt collar than a Velcro closure. I let Luke decide for his and he wanted the Velcro. It made Will's cape a little loose, but he didn't seem to mind.  If you don't sew, this would be a great way to do it. Then you could hot glue the logo on and have a complete project with out sewing a stitch. 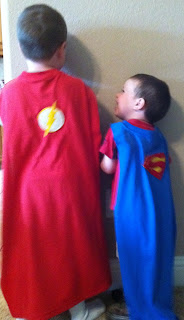 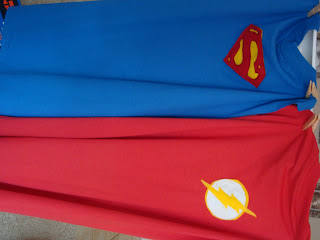 The turned out super cute and the logo isn't too small. The boys love it and the Flash has been zooming around the house all morning.

Final verdict: Smiles all around! The boys love them and they were really easy.
Posted by lizzy at 10:29 AM