A washing with vinegar and baking soda to freshen towels and remove residue, and improve drying time. It promised me I wouldn't have to give Target large amounts of money for new towels again.

Meh. I did a whole load of towels and washcloths just as directed. I notice no difference. I actually don't think they smell fresher either. I usually wash my towels, sheets, and anything smelling like a kid with about 1/2 cup of Borax added to the wash with the detergent. The Borax usually kills any funky smells and gets stuff pretty clean. The vinegar & baking soda didn't remove the smell all the way and I think it lightened some of the colors--which would be fine if all the towels were white.

Maybe you are supposed to follow up with a wash with detergent afterwards. This link didn't say. That might make them fresher smelling. I don't use fabric softener so maybe I don't have as much residue. 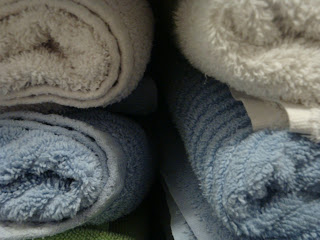 Final verdict: I'm actually rewashing them with my detergent and Borax because there was still funky smell to some of them. I'll stick with this method.