I thought this was so cute and would make a great gift but at first glance there looked to be a lot of steps. After doing it, I don't think it was hard or tedious at all. I recently invested in a cutting mat, rotary cutter, and one of those big clear plastic rulers quilters use which made cutting these pieces super easy because they were all rectangles. If I had needed to cut with scissors and measure it would have taken FOREVER! By removing that tedious step, I think I shaved off tons of time and frustration.

I did, however, mess up step two. It wasn't a major mess-up and I could probably have moved on without ripping it out, but, come on. It was step TWO! So I ripped away.

I had a weird, deja vu-ish, flashback sort of moment while threading a needle though. As I quietly whispered a curse word under my breath I had this memory of my mother sewing. I decided right then and there that I must have learned all of my curse words at a young age while playing near my mother's sewing machine. I dare say that I reminded myself of my mother, but the word *#$! sure did! Don't worry Ma, I won't tell your Bible study ladies.

I digress. Project was way simpler than I initially thought it would be. The fabric cuts are extremely generous. It says they are in the tutorial, but they really are. If I bought some more rick rack I could probably make at least two with the amount of fabric I have left.  When I first bought all the fabric I thought it might be one of those projects that would have been cheaper to purchase, but thinking I could make at least two brought that down. Also, I think it would be super easy to modify this to make a basket even bigger than this one by just increasing the size of the rectangles. 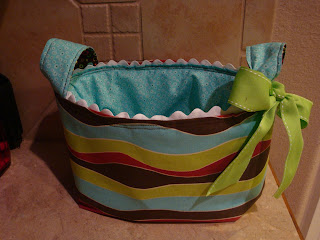 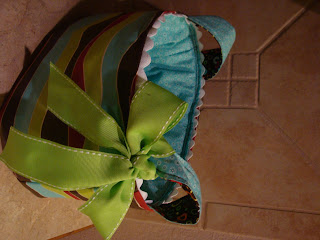 Total cost: $21 for all the fabric at their measurements. Much less if you could see how much leftovers I have!

Final verdict: Will definitely make for a gift in the future. Way cuter than store-bought baskets.  I am newly inspired in my living room decor by these colors!
Posted by lizzy at 9:46 PM