Having damp hair helped out a ton! I just wet my comb and ran it through the ponytail a few times.

Choice of sock made a difference too. At first I used a thinner, dark colored sock so that it wouldn't be as obvious if some of it peeked out. As I got better I moved on to a thicker tube sock which I preferred because it made a thicker, fuller bun.

Some people use this to curl their hair, but my hair doesn't hold curl well. It is definitely curly when it comes down, but it falls flat pretty quickly. 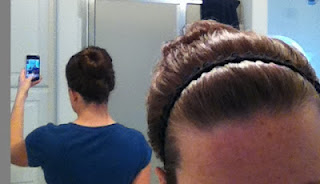 Total time: After lots of practice that was spread out in intervals over weeks, I can now do this in under one minute.

Final verdict: I love wearing this instead of a ponytail or messy bun. It just feels more polished. Although I do secretly worry about people who know the secret to the bun seeing me and thinking about me walking around with a sock on my head. Its the crazy in me.
Posted by lizzy at 4:51 PM