Glow stick bath for the kids! Seriously! How fun would that be?? As a kid, I would have thought that was awesome. As an adult, I still think is kinda awesome. I took it one step further and made it a glow stick bubble bath. I told Luke yesterday that I had a surprise for him that he wouldn't get until bath time today and he had been trying to guess for hours. I locked everyone out of the bathroom to get the tub filled to the brim with bubbles and called them in to this: 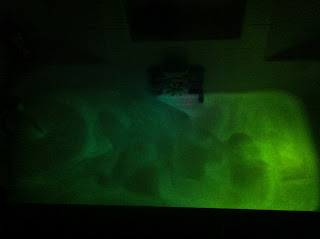 Luke stopped in his tracks and just stared, speechless for a few minutes while he took it all in. Will did not hesitate one second to strip down and hop in. 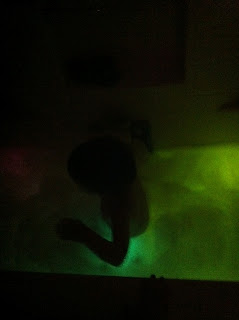 Luke couldn't let Will have all the fun so he jumped in as well. 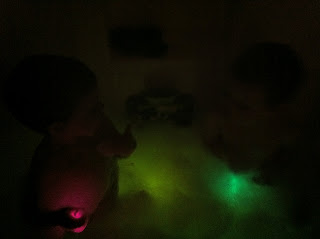 They loved it. It was so fun. They stayed in the bath tub for nearly 45 minutes until I pulled them out all prune-y.They are going to be sad tomorrow when they realize their glow sticks have gone dim.

Total time: 5 minutes to draw the bath. 45 minutes of entertainment.

Final verdict: Will be a great thing to do for a treat--maybe on a night when Daddy is out or as a reward for accumulated good behavior or something. Definitely going to keep this one.

P.S. Update to Pin 11, the Pre-K's loved the snack mix. They finished off the leftovers on the playground after school. I had some too and I have to admit, it was a little addicting with the sweet & salty mixing together. . .
Posted by lizzy at 9:10 PM