First--Wow! Thanks for all the positive feedback! I was a little nervous to share my little project, but I am really flattered by the wonderful things you all have been sharing. And I am so happy to hear that I am "pinspiring" you too!

Well, that is a little misleading. Every now and then you find something out there that just won't pin. I don't claim to understand the magic that makes Pinterest work, but this one would only pin in gigantic-bigger-than-life, can't-even-read-the-screen picture size. I am going to make it pinnable to you.

This was some sweet 9th grader's school project titled Invent-a-snack.

Luke needed a patriotic snack to share at school for patriotic week. Let me just tell you--the time period between Valentine's day and Easter is not the time to buy red, white, and blue food items.

I took a few liberties with the recipe due to product availability. For about two weeks I pretty much bought anything snack-y that was red, white, or blue. I bought Valentine's M&M's and regular M&M's and picked out the red, white, and blue ones, substituted Frosted Cinnamon Toast Crunch for Frosted Chex and Gerber stars for Star Cereal, added yogurt covered raisins and picked out the blue and red berries from Cap'n Crunch Oops All Berries (which will always remind me of my college friend and her berries mis-adventure.) Luke helped me mix it all together. (Non-measured, of course)

Here is the pinnable picture for you! 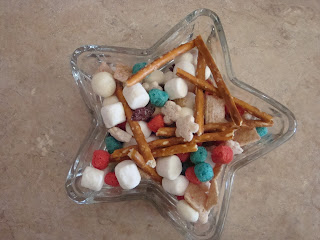 And for quick reference, the ingredients:

Mix together in equal parts or whatever looks good to you.

Luke has kept this a surprise from his class and he said "I hope its a hit! A hit means that there is none left because the hungry 4 year old's ate it all up!"

Total cost: I lost count--I bought things at different times. I am going to estimate probably $10-15 but there are lots of leftover ingredients, and it made a lot! We just kept pouring things in until we filled one of those big plastic cereal containers. Daddy was really happy to finish off the Cap'n Crunch last night.

Total time: 30 min (I separated the M&M's while on the phone with the insurance company.)

Final verdict: Luke and I approve. We'll find out from the Pre-K's tomorrow!
Posted by lizzy at 2:05 PM