I haven't disappeared! I have just been buried under a big project deadline at work. I haven't been doing much pinning the last week, but I do have a few posts to do to catch up on some pins a did a while back. Meanwhile, my little blog has just been blowing up with traffic! Today, alone, I have had over 35,000 visitors! I am shocked! My post on the Jillian Michaels flush, Pin 91, has been very popular.

Today is a two pin project. I have been waiting to post it because it was a father's day gift and I didn't want to give away any secrets.

Step one was to mix up some chalkboard paint. This stuff is all over Pinterest. Some people are using it to paint entire walls, but I decided to start small. It must be made in small batches because it dries really, really fast. And gets lumpy as it dries.

Even though it looks lumpy in the photo, it went on smoothly. It dried fast on our little boards. I put on a few coats each. We were going cheap here, so I just used a box lid and a couple of paper plates as our boards.

A few things to note: The original poster said you could use any kind of paint. I just grabbed some tempra paint I had around. I would recommend that you do not use tempra or any type of paint that is washable because when we actually used the boards, the paint came off when we cleaned them. We had to moisten our cloth a little bit which cause the paint to come off as well. I guess I didn't think about that part.

Total time: 20 minutes to mix the paint and paint our boards. The paint dried fast but we let it dry overnight before we tried it out.

Final verdict: With the exception of the fact that I used the wrong kind of paint, I consider it a success. It was easy and I like that it is made in small batches because I don't think I need a giant pail of it. No chalkboard walls in my future right now.

I packed up the boys and our new chalkboards and we snuck off to the park one day to take some pictures. I uploaded them to a photo site and arranged them into a collage to give to daddy and pops on father's day. 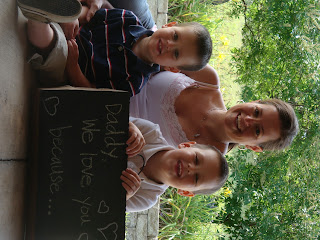 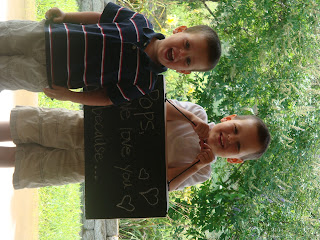 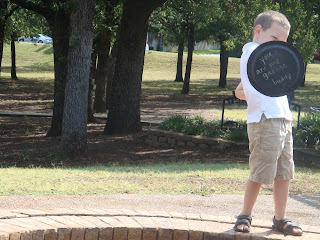 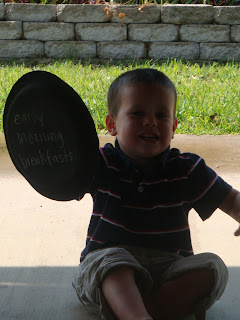 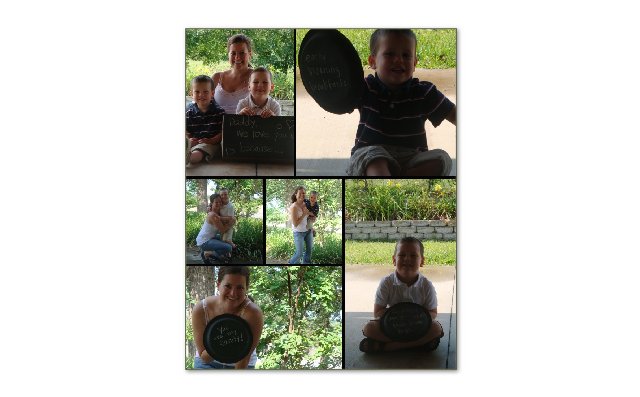 Total time: 45 minutes to take pictures, 1 hour to arrange and order them

FInal verdict: I liked the idea and the pictures. The website I used printed them on poster paper (which I would have seen if I had read closely enough) so the printed quality wasn't great. The day of pictures it was rainy so some of our pictures are dark as we had to seek shelter. Cute idea. Daddy had been wanting some fresh pictures for his office so this worked out great.
Posted by lizzy at 3:01 PM