I had pinned this originally because I liked the pink shirt and I thought i could easily make this.

Turns out, I can.

Tonight I was going out for a friends birthday. While the boys were all napping this afternoon, I decided I wanted something new to wear tonight. While I didn't have this nice pink color in my scrap bag, I did have a blue shirt I'd been wanting to change up. It was a hand me down shirt that just never fit quite right. It was in good, like new, condition, but I just rarely wear it. 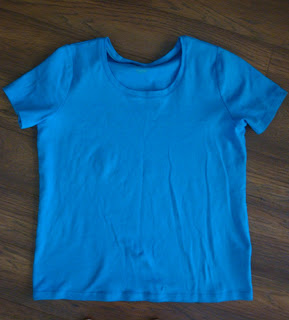 I put it on inside out and, with a piece of chalk, drew a line following the collar line, over the bust and then down to the bottom sleeve seam exactly where I wanted to make my cut. 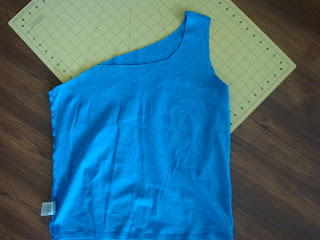 Then, I cut the front following my chalk line and then cut the back pretty much straight across. I cut off the other sleeve just inside the seam. I took in the bust area so that it would be fitted and not slip down.

If I had extra fabric, I would have used the scraps to make the ruffles, but instead, I found another shirt from the scrap bag. I layed it flat and cut two inch wide strips from the bottom. I opened each strip up at one of the seams so that I had three long strips. I sewed a wide stitch straight down the middle of each and then pulled the stitch to gather the ruffle.

I sewed each ruffle along the baste stitch to the top edge of the collar all the way around the shirt. It took two ruffles to make the top ruffle. I placed the third ruffle on the front below the first ruffle to give it some fullness.

I tried it on and trimmed the shoulder strap in a little to give it more of a tank strap. Then it was done! Check it out! 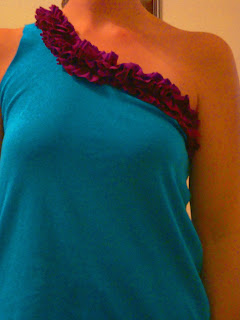 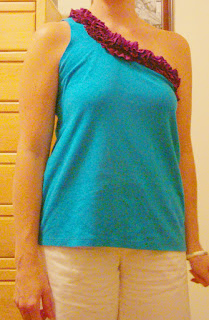 You could easily add more rows of ruffles if you wanted it fuller.

I put it on with some white summer pants and was off to dinner. Very comfortable and plenty of room to eat in!

Final verdict: I love my new shirt! The only thing I might change is that I didn't have any purple thread so I used some contrasting colored thread. You can see it a tiny bit if the ruffles are falling right. I would have preferred the thread to match, but its not too big of a deal. I might add another ruffle row to the front and the back but I don't want to add too much bulk under the arm. We'll see.
Posted by lizzy at 9:13 PM