I pinned this learn-to-tell-time clock especially for boy-who-loves-circles, also known as grandson of man-who-loves-circles. My oldest has loved circles since he was an infant and still has a fascination with all things circular--coins, wheels, clocks, CD's. . .   There was a time when he wouldn't leave the house without one of his Fisher-Price piggy bank coins in his hand. He has been trying to figure out how to read a clock for a while now. He is only 5 and hasn't yet learned to count by 5's so teaching time is tough.

I made him this clock: 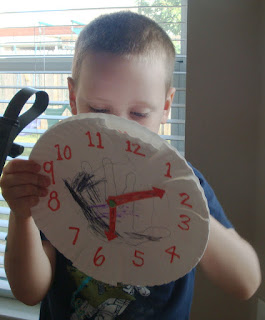 I let him decorate the top plate while I made the bottom plate and the clock hands. Look closely--when I told him the arrows I was making were for the clock hands, he traced his own hand on the plate to beat me to it. Clever fellow.

So we put it together and then I had to explain the concept to him. He was so excited he could barely stand still to listen to me. He just had to get his hands on this clock. It took about 5 minutes and 6 or 7 demonstrations before he had this concept down. Shortly thereafter, Daddy came home from work. We showed him that we had made a clock, but didn't show him the secret second plate. From where Daddy stood, he saw me set a time on the clock and hand it to L. Then L looked at it and told me the time. Daddy was SSSOOOOOO impressed! After three tests, we showed Daddy our secret trick.

L loves this clock. He sleeps with this clock. I ask him the time and he goes to get his clock, sets it to match our clock and then reads me the time, nearly perfectly. He has trouble with the xx:05 time because he always says xx:50. Understandable. Remember, he is only 5 and not yet in Kindergarten yet. 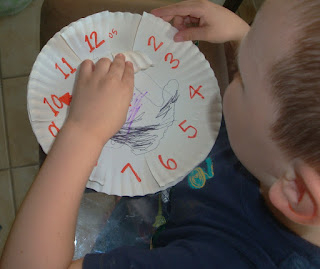 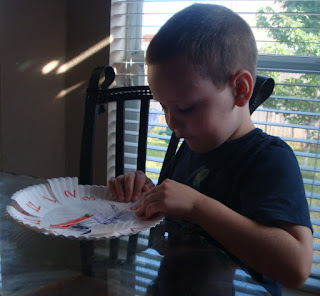 Total cost: $0, a couple of plates from the pantry and a brad from the scrapbooking bin

Final verdict: A very cool teaching tool. He loves it. Even though he can't count by 5's yet, with enough repetition, I think he will probably memorize the clock enough to tell time a little--at least better than he could last week.
Posted by lizzy at 12:27 PM