A pasta salad just for me tonight! Not because I was alone, but just because it used all my favorite things that the boys just don't appreciate like me--except the bacon.

I used penne instead of bowtie/wagon wheel and I made about 1/2 the original recipe. After swimming lessons tonight the boys wanted to go fishing and it was my job to pack a picnic dinner. Since I learned how to cook bacon in the oven (thank you Better Homes & Gardens), I cook it much more often. I put a leftover half package of bacon in the oven this afternoon and used a few slices for my pasta salad and put the rest on ham sandwiches for the boys.

I really couldn't go wrong with this. Like I already said, it has all my favorite things. I have been making a pasta salad similar to this for years. I never thought to put bacon in it, though, and I usually just toss it with light Italian dressing, so this gave it a different twist. I used light string cheese sliced into circles because that is what I had on hand. 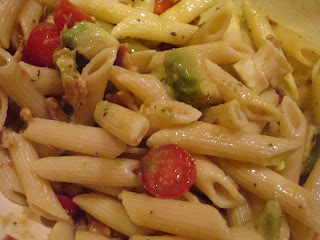 My bacon was crispy when it went in, but I refrigerated it for a bit which took some of the crispy appearance away. It didn't diminish the taste and was actually still rather crispy.

Total cost: All my favorite things = everything on hand. My day is not complete without an avocado and I had just bought a bunch yesterday. The tomatoes were free (yay for coupons!) and the bacon was leftover from another meal and stashed in the freezer.

Total time: 9 minutes. I cut all the veggies and stirred the dressing in less time than it took to cook the pasta.

Final verdict: Delish. How could I go wrong? It carried well to the picnic and was a nice, light meal to have in the blasting Texas summer heat. I can't wait to eat up the leftovers tomorrow!