One of my teacher friends pinned this and I clicked to see it because it looked interesting. It is on a site full of fun things for teachers to purchase and print out on their own. I have been looking for some new disciplinary strategies for L. We have been struggling with behavior lately. Back in the spring, L's asthma was out of control and we had to start him on a new medication that really affected his behavior. We tried to wean him off of it this summer, but his symptoms started to flare up again and we had to put him back on it. Now we just have to learn to manage the behavior that comes along with it. This week we started two new strategies that have been working like a dream, so far.

The second strategy is where this pin comes in. Associated with these coupons is a behavior chart.

While I don't care to have tickets, and L isn't quite old enough to understand the saving tickets and buying coupons concept (he's 5), I do like the rainbow chart with the clip moving up and down. I feel like he can check in with his behavior on this one. My husband and I sat down and modified it a little with our expectations and eliminated the tickets portion. 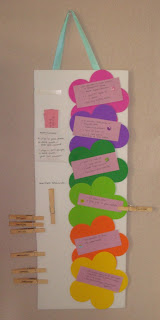 Each color has a list of privileges earned or lost. There is a new clip for every day. He starts out every day in the lime green and moves up or down based on his behavior. At the end of the day his clip stays in that color. On Sunday, if he has four clips in dark green, purple, or pink, he gets to pick a reward from the envelope. He will get his reward sometime in the next week, depending on his choice.

He totally digs it. I move his clip up for lots of things, with and without warning. For example, "If you get a good behavior report from your playgroup leader I will move your clip up." and also, "You are being such a good helper with your brother. I think you deserve your clip to move up."  He loves to play on the computer or ipad so these are rewards he really works to earn. I also gave him the option that if he wants to move his clip up he can ask for a chore. If he completes the chore without complaining, his clip will move up. He can read all the words on his chart so if he asks for something, I send him to his chart to see if this is a privilege he has earned.

The first day I read him all the rewards in his reward envelope. These are things he is dying to do. He is so excited to start earning these big rewards.

Total cost: $0 I made it completely from supplies out of the craft stash

Total time: 1 hour, including discussions of what we wanted at each level.

Final verdict: It is like I got a new child this week. There has been no yelling, no time outs, and much decreased negotiating. Time will tell if this will have long-lasting power. I figure as he asks for things, we will add them to the reward envelope or fit them into the behavior levels. If everything continues as it, he will be choosing his first reward tonight.
Posted by lizzy at 2:34 PM

Email ThisBlogThis!Share to TwitterShare to FacebookShare to Pinterest
Labels: for the boys, inspriation, parenting