This website has hundreds of DIY spa recipes. Where should a girl begin??

After two weeks of mommy & me swimming lessons the chlorine at the pool has really done a number on my skin so I wanted to do something that would help out my skin--starting with my face. I chose the honey oatmeal face mask. It also helped that I had all of these ingredients already.

It said to grind the oatmeal to a fine texture. I thought I did, I put it in the food processor and long enough to nearly turn it to dust. When I added the other ingredients though, the oatmeal swelled with the moisture and made it kind of lumpy. I thought it would be a little exfoliating, but the oatmeal was soft.


I smeared it all over my face. It was lumpy and cold! It didn't spread very easily so it was kind of like taking lumps and mushing them in place. I left it on for the prescribed 15-20 minutes after which it had dried to a rubbery consistency. It did smell delicious! I little part of me wanted to eat it. 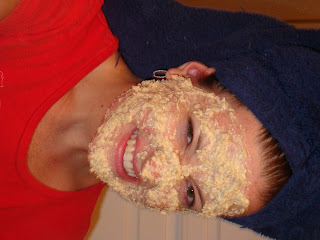 When time was up and I needed to rinse, I hesitated at the bathroom sink. This thick, rubbery stuff would probably clog up my bathroom sink so I rinsed in the kitchen sink just to avoid the plumbing problems. In the thicker parts it didn't dry completely, so I wasn't sure if this would affect the outcome.

The recipe made a lot! Maybe I was supposed to layer it on thicker but I was worried about chunks falling off all over my house. This is how much was left. That is at least enough for one-two more treatments. Or maybe I'll just eat it for breakfast. 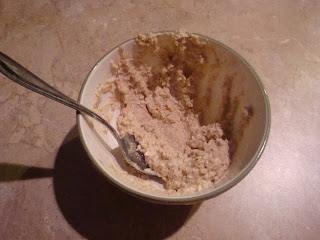 Final verdict: I was very skeptical of this actually doing anything. However, my face was really soft afterwards and moisturized. I probably will use this for another treatment instead of breakfast. I don't know about the oatmeal, though. Maybe next time I'll try grinding it finer and try to avoid some of the lumpiness.
Posted by lizzy at 8:07 PM