Pizza made in the waffle maker.

I stole a waffle maker from my sister in our yearly family Christmas exchange. No, not very sisterly, I know, but I just couldn't hold back when it came to kitchen appliances. It's actually worse than that. . . I didn't steal it, I made my husband steal it. Dang, I guess I had better get her something really nice this year. I digress. I want her to know that it is being put to good use so I am cooking with it on a regular basis. This is a new one to me though.

The recipe called for pizza dough in a package. I am a teensy weensy bit of a pizza dough snob and I only use my own dough that I make from scratch. I just think it is so good--and just as easy as the pre-packaged stuff. We make homemade pizzas about once a month around here. It is one of the boys favorite dinners because I usually let them help build the pizza.

Other than the pizza dough, I pretty much followed the directions. I folded up the edges and sealed them with a fork (like when you seal a pie crust.) I'll be honest. I was a little scared of this. I had visions of the horrible mess this was going to make with burnt, baked on cheese and sauce.


But when I opened it up I was relieved.

This one was intended for the boys, so it was a bit smaller than the rest. Theirs was just sauce & cheese, the one chock full of veggies for me, and Daddy got pepperoni.


After the fear of the burning mess was out of the way, I cooked the rest of them without fear. They didn't always come out pretty, but none of them burned. 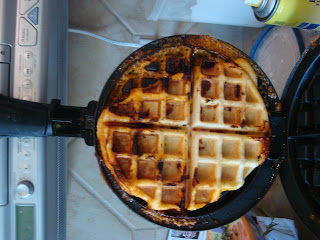 The very last one, though, I learned something. Don't close the waffle maker all the way. The last one was so stuffed full of pepperonis and cheese that I couldn't close it. This gave the dough a little room to expand, it didn't lose as much sauce & cheese, and just tasted better overall.

The taste? It was kind of chewy inside the waffle squares, the thinnest parts. The kids did not go for it at all. Torn between his love for waffles and his love for pizza, W just kept asking when he was going to get his pizza.

Total cost: $4 for pepperoni and cheese. My crust is from flour, yeast, oil, and sugar--all which I keep steady supply of

Final verdict: This was a little messy, although not as bad as I had predicted. My husband liked it. I thought it was just okay.  I admitted to my pizza dough snobbery and I just didn't get the delicious crust that I am used to.  The kids were totally disappointed by it. A cute idea, but it didn't save me any time or mess than a traditional pizza or pizza pocket. It would be a great idea for a meal for one or two, or maybe if you were cooking without an oven. I probably won't do this again. I would rather have an oven baked kind. We threw the leftovers away.