The original creator said to put ice cream into the popsicle mold and then fill up with root beer. I wasn't sure how that would work with my Popsicle X-press (remember when I told you about it back on Pin 21?) The molds are a little small and tapered and I was not sure I could get the ice cream in the right spot. Plus the X-press has some particular guidelines to follow to make sure you can get your popsicle out and I wasn't sure how that would work either. So I decided to blend my root beer and ice cream together first instead of having them separate. It created a consistent flavor throughout.

Unlike Ms. Butter-me-up-brooklyn, I did not make my own root beer. Store bought was the way to go this week--especially after I recover from a pretty rough two weeks at work. Lu's excited that we have leftover root beer and I promised him some after school tomorrow.

After dinner tonight I blended it up and popped it into the Popsicle X-Press and the boys watched the timer countdown.  Ten minutes later we popped out 3 of the 4 popsicles and devoured them. My husband described it as heaven. They were delicious. The fourth popsicle got stuck in the mold. The soft consistency of the ice cream prevented it from freezing through and the stick slid right out. This may be a problem I created by blending the two together first or may be because I used the X-Press instead of freezing traditionally. It didn't really matter though because we just took a spoon to the mold and scooped out the creamy goodness. 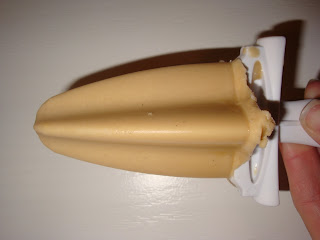 I may play with the root beer to ice cream ratio a bit. I used four average sized scoops of ice cream to one can of root beer for 10-ish popsicles. I bet if I used only three or two the ice cream taste would still shine through while still allowing the popsicle to set up a little harder.

Total time: 3 minutes to blend together, 10 minutes to freeze (thanks to the X-Press)

Final verdict: Delicious. We were fighting over who was going to get to drink the melted mix in the bottom of the blender. I think this one is going to be requested around here. And Lu is excited about the perks of left over root beer and ice cream. I just may have to show him what an actual root beer float is.