Whoa. A triple pin project! A few months back I scored some new furniture for the boys future room (when I determine they are old enough to bunk together--which I hope is sooner rather than later). This furniture came from a friend who offered me a deal I couldn't refuse! It was truly a bargain. The furniture was in good condition structurally, it had just had a little love from the previous little boy so it needed a little tlc. 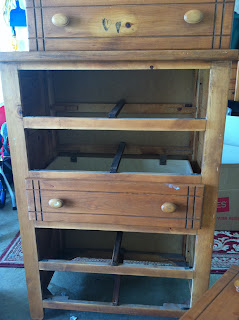 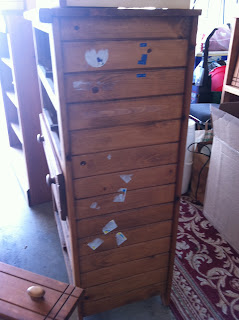 My little one's dresser is literally falling apart. I can no longer put the drawers back together on a weekly basis AND keep my sanity. I decided it was time to start moving in the new furniture, beginning with the dresser. I read a lot of blogs about refinishing furniture. It was probably a little too much because my plan got a little muddy. The pins I shared here are the sites I actually used techniques from. The first pin inspired me to prime with spray paint rather than brush on primer. I quickly hand-sanded all the parts first and then put on a sturdy layer of Kilz spray primer. Then I started painting. After two coats, I decided I needed a third. After three coats, I decided I needed a fourth. I love deep, rich colors which always require extra paint. Such a chore. I have painted two rooms red (requiring three coats) and one room deep brown (requiring four coats) and I still go for these colors. I finally achieved the color and coverage I wanted.

I'm not going to lie to you. This is the point I got really nervous about the distressing part and nearly backed out. All this time and work to get the perfect color and now I was just going to bang it up? Something didn't feel right about this. What if I messed up the messing up part? But I am dedicated to the pin so I jumped right it before I could over think it any longer. (The second pin, above)
Now onto (what I thought was going to be) the final step. Providing a protective coat, per pin three above. I thought I was going to be really smart here and apply a sealing finish with a spray paint sealant specifically indicated for indoor furniture. I was horrified. 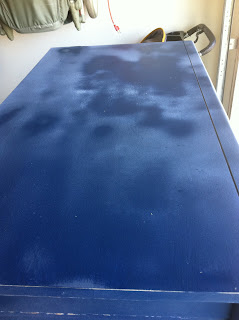 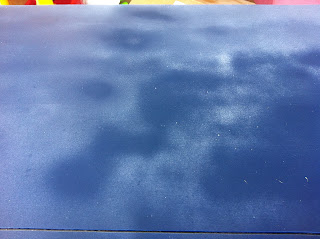 This spray sealer did this to my perfect paint job. It was powdery and gritty, and I was just so disappointed. When I finally pulled myself up by my bootstraps and went to the hardware store armed with these pictures, the paint expert took one look and said, "You spray painted over a water based paint? Can't do that. All spray paint is oil-based." Dang. Luckily he had a solution for me. I had to sand it down, again, and paint it, again, and seal it, again--but with a water-based sealant this time. And so I did. Sanding the whole piece, I actually was glad this had happened. I saw the effect of sanding the entire surface, not just the edges as I had done originally, and I really liked how it looked. Sanding made me brave. After the fifth coat of paint, I sanded much more aggressively than I had the first time and I was much, much more pleased with the results. Ready to seal, again. As soon as I started, though, I noticed that the sealant was smoothing out the texture that the sanding had provided.

I was not going to sand or paint this thing again. So I just stopped. Nope, no sealant. What is the worst thing that can happen? The paint might scratch off. Great! I've already spent a lot of time doing that intentionally. So I put the knobs on the drawers, put the drawers back in, sanded off the three or four slats of sealant, and called this turkey done. 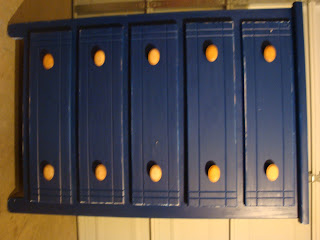 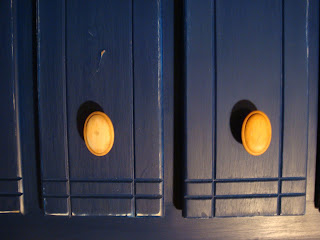 One other non-pin related snag I had with this project--I intended to replace the knobs. However, after taking them off I found they are some sort of fancy custom knob that would require me to repair the current holes and drill new ones. At that realization, I decided these knobs would work fine.

Total cost: $30 because I bought way too much paint and two kinds of sealant. Not including the price of the dresser. It was a steal and part of a set.

Total time: I feel like I've been working on this for absolutely months, but probably more like 3 weeks, off and on. I needed recovery time in between defeats.

Final verdict: I love the way it turned out. I have two more pieces of the set I am going to do in this color because I have so much extra paint. However, I will be buying an electric sander before I start the next piece.
Posted by lizzy at 8:24 PM