I have been in major re-decorate mode since Christmas. In fact, when I packed up the Christmas decorations this year, I packed up/gave away a lot of the regular decor as well. Our house has been in a transition since then. I have been gathering pinspiration and inspiration, setting random things down around the house to absorb the presence of the object. I'm a little embarrassed to have people in my house right now. We are getting new flooring in 85% of the house in a few weeks so I have been a little more motivated to get things pulled together--mostly to get them up off the floor. I had an idea in my head for the kid's playroom wall that required hanging a bunch of things and I thought I'd try out this technique because I thought it was pretty clever (and simple, right?!?)

Here is the playroom before:

I used the three pieces that were already there (IKEA pieces circa 2007? 2008?) And then I added a few I had collected and decided would go well in here, including this fabulous piece I made at Ladies Night In with www.paintlikepicasso.com . 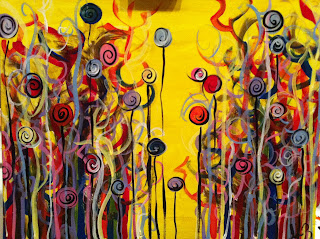 I marked the spots on the back, just like the tutorial said and went to work. First, I carefully balanced my level on top of my canvas. Tune in to my inner monologue for a minute: "This is going to be the easiest, awesomest way to hang pictures. I'm just going to balance this level here and the picture is going to be perfectly straight. Its going to be great. I'll just lift it up right here, no, higher, here. Yes, that is just about. . . . " 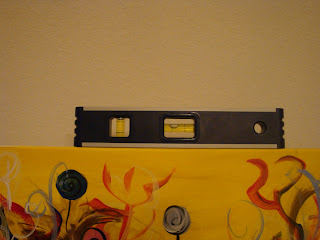 CRASH!!!  Want to know what was under those hats?? A few years ago, my son bought everyone piggy banks for the holidays. My husband and I had stored ours in the playroom for some unknown reason. I had envisioned one day installing a shelf and putting them all together on a shelf, but that had yet to happen. View the wreckage:

I thought this was the extent of the damage until I saw mine.

Okay, back to the pin. After cleaning up the spray of ceramic chips I tried round two with the same picture because I hadn't quite made it to the wall. I pressed it up there and then pulled back to see two little dots lingering. I put the nails up there and, dang, it wasn't level. So I moved one. Nope, not yet. I moved it again. Not quite, but good enough.

Onto the IKEA pictures. These were different because they have the picture hangers on the back. The problem here was that the hanger was recessed further back than the lip of the frame. I had to pull it out and hope that the mark landed in the right place when it was pressed up against the wall. 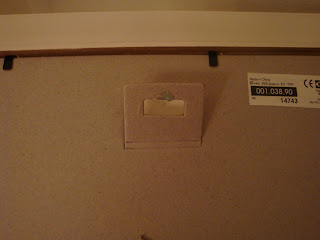 It was pretty close. Here is the problem with the technique though. No matter how small of a toothpaste dot I put on the picture, I always ended up with a large dot on the wall that was much larger than the nail. Even if I put the nail in the center of the toothpaste it wasn't always even with where I had intended it to be. It wasn't too much of a problem except on the frames that required two nails (like the first piece.) 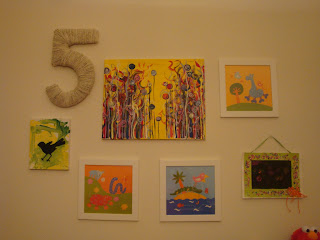 Final verdict: I like how the wall turned out, but I will not be using this technique again. To me, it was just as easy as measuring/guesstimating and I have seen dozens of techniques out there on Pinterest. I usually have a pretty good eye with this sort of thing. I hung the 5 without toothpaste and it was actually level when I checked it. (Pats self on back) Lessons learned: Don't hang pictures while hovering over breakables.