A recipe for no-knead bread. I had pinned a while back, but last week my friend recommended that I try it because she had good results with it. I love making bread and I do it once or twice a month. I especially like making it in the spring/summer when I don't have to worry about it being too cold in the kitchen. I don't have a bread machine (surprised?) so it is always made by hand. I do cheat sometimes and let the KitchenAid do the kneading though. Because this one had a good recommendation I moved it right up to the top of the list.

I mixed it up this afternoon, popped it into some plastic ware and the boys and I headed out to run some errands. 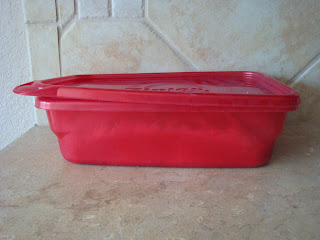 And then came home to this!! Oops. I guess our plastic ware wasn't big enough! 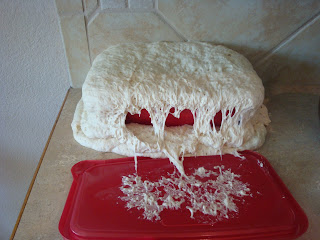 Not a big problem though. I just grabbed my dough scraper and scooped it into another bin. (The counter top was clean when I placed the plastic tub there.)

After seeing this mess I envisioned it happening in the refrigerator too, so I decided right then and there that I would make all of this bread tonight. I don't have a baking stone so I went with the parchment paper method. The recipe calls for dusting the top of the dough before you cut off a piece. I did that, but then I also dusted the ball that I cut off prior to shaping so that it would be a little easier to work with. I jumped ahead and cut slits on the tops of my loaves before the second rise. It didn't mess things up. I was able to make five round loaves. 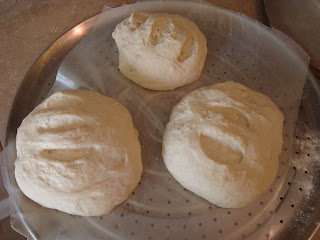 I popped them into the oven two at a time and after 25 minutes they were baked up and beautiful. 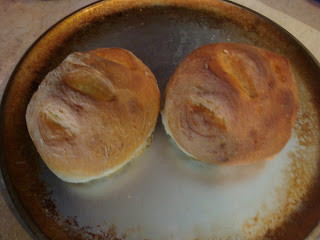 .
I did have one snag here though. The parchment paper was completely stuck to the bottom of the loaves. I'm not sure why, it happened to every loaf. I had to peel and pick all these little pieces off. Some places I had to just rip the crust off. I thought about dusting cornmeal down prior to baking but the original post said that made it stick too. Maybe I will try some non-stick spray? Or a brush with olive oil prior to placing it down?

Overall, it was super easy and a good basic bread recipe. It didn't have a ton of flavor, but it was a good bread. (And who doesn't like fresh, hot bread?) You could easily add herbs to the dough or flavored butters/oils to the finished bread that would complement your meal. My husband enjoyed it and both the boys gobbled it up. Hubby said he just might make some sandwiches with the leftovers (if he can find them).  Since I do have five fresh loaves (well, now four after dinner) I wrapped them up in some foil and tossed them in the freezer. I have done this with every bread, muffin, waffle, etc. that I make and they keep just fine. Now I have fresh-ish bread even faster next time! These would make really good soup bowls because they have such a good, crusty exterior. The bread is dense enough that it would hold up nicely to a chowder. Hmmm. Dinner for next week? We'll see. You could also be a real sweet neighbor and deliver the extras to your friends nearby. (But not if there are tiny bits of parchment stuck. Sorry neighbors, maybe next time.)

Total cost: $0, all ingredients on hand, but the original poster claims they are about $0.40 a loaf

Total time: Hands on, about 15 minutes. (And about 20 minutes of picking parchment paper)

Final verdict: Will definitely be doing this again, but I'm going to figure out this parchment paper issue. And I would love to experiement with some herbs--I can smell the rosemary and sage now...