The recipe is simple enough. I got to use a kitchen gadget (yippie!) I did have to make a special grocery store trip to find whole milk powder. I found it at Target in the section with imported foods. It was kind of pricey for the one tablespoon I needed, but maybe I'll just be making a whole lot more of this. Either that or I need to find some new recipes that call for whole milk powder. Or just make some milk.

It was super salty when eaten by itself. The kids looooved and kept begging for more. Next time I would cut the salt in half at least. I, personally, don't love salt. It is great on potato chips and that's about where it ends for me. All together, it was a little expensive (due mostly to the milk powder) but I have a lot left over so maybe that will come in handy in the future.

Final verdict: Too salty on its own, but delicious in. . .

Clever little grilled cheese roll-ups. We have made these before, but I didn't post on it. They were yummy the first time, but with this homemade cheese they were even better. The kids gobbled them up. I wanted more but refrained just because it is nearly swimsuit season.  They are just as easy as regular grilled cheese and perfect for dipping in tomato soup--which we did! 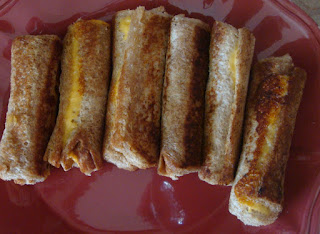 Total cost: $0  We put our expensive homemade American on wheat bread from the pantry

Final verdict: A winner around here already. Daddy is going to be sad he missed dinner tonight.
Posted by lizzy at 6:55 PM