A cute and cheap idea for some original wall art. I have this space above my entertainment center that I have been trying to fill for years. No, literally. We have been in this house six years and I have NEVER had anything in this spot that I was happy with or felt like it was appropriate for the space. This seemed like just the thing.

The original pin called for scrapbook paper adhered to wood blocks the author bought from the hardware store. There were two problems I initially saw with this: 1. Wood blocks are heavy. Nine wood blocks are heavier. 2. They would require picture hanging equipment to be installed to the back. Installing picture hangers is just one of those things I can't stand doing. Too much precision required, I guess. So when I came across these canvases at the 99 cents store I was really excited. Light weight, no picture hangers required, CHEAP--perfect. 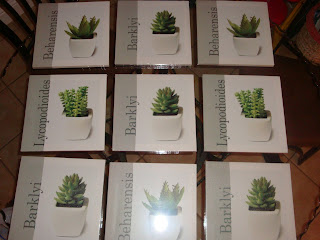 With the first canvas I had trouble. The paper was buckling and bubbling (like paper does when it is wet. Surprise.) And I could just not get it to lie flat and smooth. I tried a few different techniques to no avail.
Surely I am not the first to have this problem. I got on the friendly internet and did a quick search. The third place I looked had this awesome tip. It was so awesome, that I had to pin it to my friends so that they, too, could know the awesomeness of it. (That is how this pin project turned into a two pin project.)

Here is the second pin:

The most fabulous tip ever is that you can fix these bumps with a hairdryer! Amazing! I didn't know that! But it worked like a charm. Coincidentally this pin was actually for the same project (scrapbook paper on canvas.) I also learned from my google search that there is a special Mod Podge for using when working with fabric, but that's for next time. The hairdryer trick worked great.
Even on canvases more wrinkled than this one, the trick still worked. You can't let it get too hot or the Mod Podge will boil and create bubbles. One drawback was that it had to be dried again after every coat so this step added significant time to my project. I did the original coat to plaster the paper to the canvas. Sanded the edges to give them a smooth edge and a little bit of a weathered effect and then I put on a second coat of Mod Podge. The original project called for antiquing paint (?) which I am not really familiar with. Is it a type of glaze?  I took a little brown acrylic paint and added it to the left over Mod Podge in my bowl to create a glaze which I sponged, smeared, and wiped on and off the edges to give it some dimension and authenticity. Some I did the edges only and others I did the entire tile.

The final product laid out on the table. 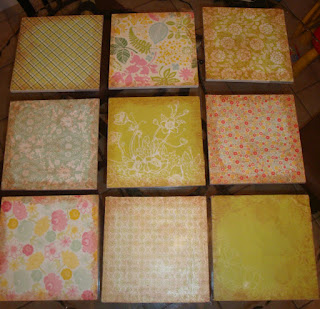 All that is left is to hang it up!


Hanging that was a dusty chore!! But I got the corners while I was up there.

Final verdict: I love the look of the tiles themselves. I love having something up in this space. The top of the center needs some tweaking and now I have this great nook in the living area. Time to work my way around the rest of the room!
Posted by lizzy at 12:15 PM