A trick AND a treat for Halloween!

I have totally over-thought this one. First--where is the ravioli??  This is farfalle. But it looks good and the recipe sounds good. I thought a crock pot dinner on Halloween would be the way to go to avoid the rush that comes in the evening. But when I started reading the directions I had to change my plan. You brown the ground beef and onion and then put it in the crock pot with the canned tomatoes and tomato sauce for 7 to 8 hours?? And you have to precook the pasta too??  That just seems excessive--and a little pointless. What is the crock pot for then if not just to keep it warm? I just couldn't bring myself to chop onion and brown ground beef at 8 this morning so I took a sharp detour on this one.

Ditch the crock pot. I started boiling water for the pasta in one pot and browning the onion and ground beef in the skillet. The pasta and beef finished almost simultaneously. I drained the pasta and added the beef and onion mixture to the pasta. I added the herbs, tomatoes and tomato sauce to the pot with the intent of simmering it together to develop some flavors. There was no where near enough liquid. I only used 1 lb of meat (recipe calls for 1 and 1/2 lb) and 12 oz of pasta (recipe calls for 16 oz) so I can't possibly imagine how this doesn't burn after 7 hours in the crock pot. I even had a little extra tomato sauce I had tossed in since I had two 8 oz cans (recipe calls for 15 oz).  I added an additional can of stewed tomatoes to try and spread the sauce a little. Due to the small amount of sauce, I couldn't really simmer it much so I just left it on the stove on medium-low long enough to heat it through. My grocery store was out of frozen spinach this week so I omitted it. I tossed in the cheese just before serving it up--on special Halloween plates, mind you. 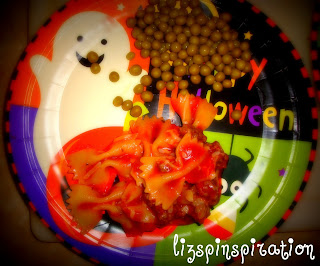 I know that sounds like a lot of negatives for this recipe, but really, it was fairly tasty. I would put this in the category of kid food because it is pretty kid friendly. Not unlike a Hamburger-Helper sort of meal, but with better ingredients (i.e., no powder to mix sort of ingredients).  Both the boys ate it--which you probably know by now means it is a keeper. And it wasn't hard at all. Here is what I would change next time: While the beef and noodles are cooking in their separate pots, I would simmer the tomatoes, tomato sauce, and herbs together in a separate pot so the flavors can mingle before mixing them all together. I would use diced tomatoes instead of stewed tomatoes--mostly for their bite-sized quality and I would increase the tomatoes to at least two cans, if not three.

Total time: Without using the crock pot I pulled this together in about 30 minutes.

Final verdict: It was an easy weeknight meal. I can't imagine how it would pull together in the crock pot. It just doesn't seem like there is enough liquid. However, it had a good flavor and I think if you allowed the sauce to cook on its own you really could get some nice flavors out of it. When our neighbor came trick-or-treating he said, "mmmm! Smells like spaghetti in here!" to which my husband replied, "Not spaghetti. Almost spaghetti." And this meal may be forever known as almost spaghetti. It's pretty accurate. . . if you changed the farfalle to spaghetti noodles, what would you get?

And now the treat:

A little "candy corn" dessert. This just looked so refreshing to me! I dished up the pineapple and oranges into cups while the "almost spaghetti" cooked. When the boys saw them they just went gaga over the fact that I was making a dessert! Oh poor deprived children whose mother never makes dessert. Sir Lancelot's eyes lit up, he clapped his hands, and he cried out with glee, "Oh, momma! It's a HEALTHY dessert!!"  Wow. All this and they didn't even know about the whipped cream yet.

So after they gobbled up their plates of "almost spaghetti" with peas they were served up these little delicious items--now topped with whipped cream. Seriously, they were gone in 45 seconds. Before I had even had time to top my serving with a little whip and sit down Sir Lancelot was drinking the juice from the bottom of the glass. 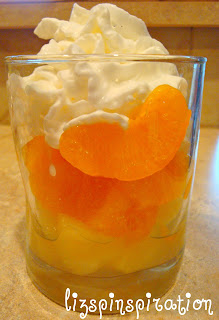 Final verdict: These were so good. And I don't feel guilty one bit for eating them. Winner. Sir Lancelot, you'll see these again, my dear. We've got a whole can of whipped cream to finish off.