A tutorial on how to ruffle using your sewing machine by toying with the tension settings.  Looks promising.

Especially in the face of 25 yards of tulle!!!
I'm not yet going to tell you what all the tulle was for, but just know for now that it needed to be gathered/ruffled. I had a few steps and cuts prior to the ruffling stage, but soon got to where this pin hopped in.  My machine is at least 30+ years old. I inherited it from my grandmother and it doesn't have a whole lot of fancy features. I wasn't sure if I had enough options available to make this one work. 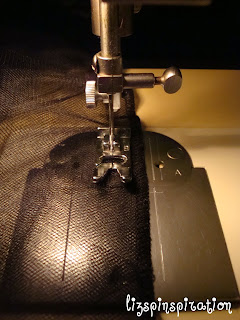 This photo is actually about six layers of tulle going in to be ruffled.

Because it is black, it made the pictures a little hard to see, but look towards the back by the word "ruffles." 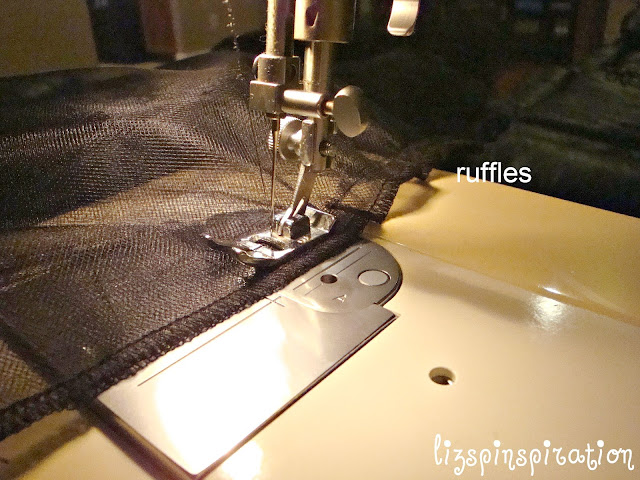 Yep, they were there. They weren't nearly as tight as the ones in the tutorial picture but I have a feeling it was due to the fact that I was using tulle and not a cotton fabric. The thread just slides right through the tulle and probably made it a little hard to pull at the ruffle. 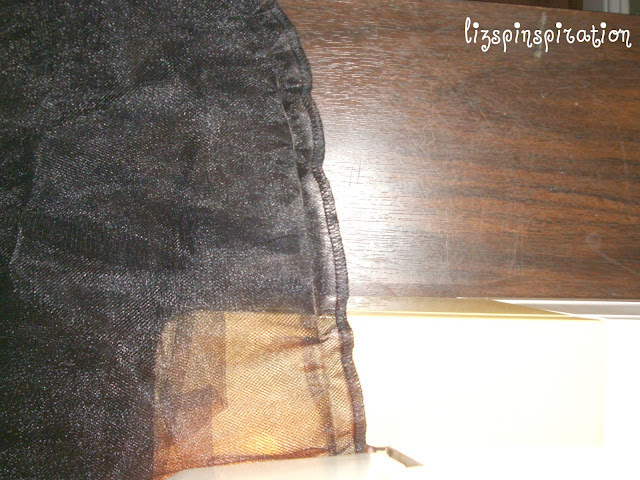 Another shot at the fabric coming out the back of the machine.  The picture doesn't really do it justice. There were more ruffles than it appears.

Total time: Or should I say "Total time saved?"

Final verdict: The ruffles were not as tight as I was looking for, but I have a strong notion that that is due to the tulle rather than the machine or the technique. Thankfully, due to the tulle I was able to just give the threads a quick tug and tighten them up to where I wanted them. It worked and overall I would call the pin a success. I am keeping this trick around and can't wait to try it on some sturdier fabric.
Posted by lizzy at 7:11 PM