I have a couple of people in my life right now that are in need of some cheering up this week.

With a little message tweaking I thought this would be a cute, cheerful gift. I got to the store, though, and couldn't decide between peanut or plain. So I just got both.

Step one: Make a cute little saying and modge podge it to the lid of a mason jar. 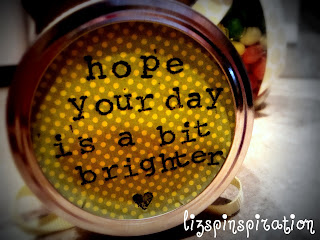 I used my favorite alphabet stamps to spell it out on some scrapbook paper. I cut out the circle and mod podged it straight on to the inner lid.

While that was drying, I went on to step two--sorting m&m's by color. I also had some tough decisions to make--one jar of plain, one jar of peanut or mix the two? I decided to keep them separate. Once they were all separated I had to decide on color order. Rainbow was best, but what about brown? Where is brown in the rainbow?? I did the plain first and put brown on the bottom. 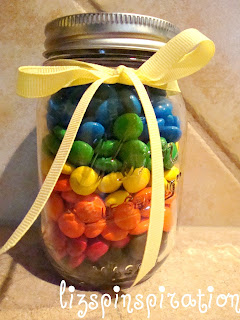 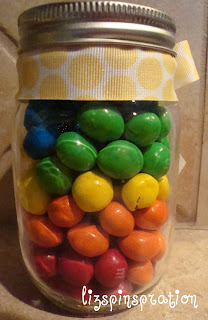 Shortly after sorting my mod podge was dry and I popped those lids on, tied a bright, cheery bow, and these puppies are ready to go. 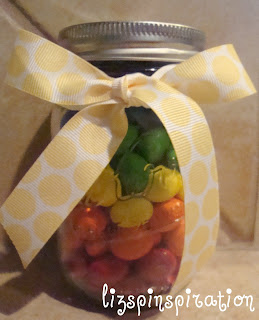 Next step is delivery. One is for someone I don't know terribly well, but I do know she's had a rough week. I think I'll random-act-of-kindness her and just drop it off at her work's front desk. Come to think of it, I might just random-act-of-kindness both of them. I don't think either of them are following me here, so if you see these around town don't let my secret out!

Total cost: $5 total--two jars, two bags of m&m's. By the way, these are pint sized jars and they fit exactly the 12.5 ounce bag (labeled Medium) of m&m's. I was hoping for a few leftovers for me, but I needed every one to fill up the jar!

Final verdict: These were easy. You could do this even if you can't craft at all! The lid without a label would still be cute. I think these would be really cute with Skittles too! For holidays, you could by the holiday colored m&m's and layer them. There are endless possibilities! I didn't trust my kids enough to help out and not eat them, but if you trust your kids you could totally put them to work on the sorting part. 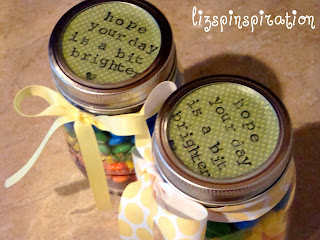