I know I have mentioned this a lot, but I like bread. I like homemade bread. I like to make homemade bread. Tonight I wanted to make some fresh french bread to go with our spaghetti dinner but I was running around this afternoon and didn't get my usual recipe started early enough. It takes about 4 hours all together with boiling milk, kneading, two risings, etc. I decided to try this one out.

I'll be honest here. I was real skeptical. I just wanted to keep changing little things up here and there. For instance, I wanted to use quick rise yeast instead of regular yeast. Really, would it rise enough in one hour?? I wanted to knead it longer. I wanted to let it rise longer. I wanted to add more flour. But I didn't. I usually try recipes as written once before I start making changes or substitutions. As much as it pained me, I did it almost exactly. Here are the changes I made:

1. I made the whole dough in the stand mixer with the bread attachment.

2. I did NOT create a warming cabinet in the microwave. The author doesn't go into much detail except stating to run the microwave for 2 minutes before you put the dough in to rise. Um, I was always taught to NEVER run a microwave empty. I do often, almost always when making bread, create a warming cabinet in my oven. I run the oven at 350 for 1-2 minutes then shut it off. Then I put the bowl in the turned-off oven for rising.

3. The dough was so sticky it was almost impossible to handle to shape. I gave it a good dusting with flour before tossing it on the counter. Patted it to a flat rectangle, then rolled it--jelly roll style, to put on the pan. My second loaf was prettier than my first because of the stickiness.

4. I lined my pan with a piece of parchment paper, sprayed with cooking spray. Sticky dough has burned me before.
So no real ingredient changes or huge method changes.  Meanwhile, as the bread was cooking I was tending to a couple busted lips with Popsicles. I was trying to assess the damage and determine if I could let the bread cook or needed to turn it off and head into the ER. Luckily, the Popsicle fixed him up enough. It's a little ugly though. 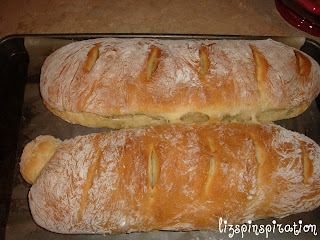 My major dusting of flour really shows here. How to fix this? Butter. Butter fixes everything, right? I just brushed on some melted butter and lookee here: 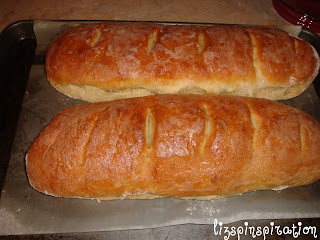 Gorgeous. Paula Deen would be so proud. And now my little tasting biscuit is in my belly. Here are some other pretty shots of the bread. 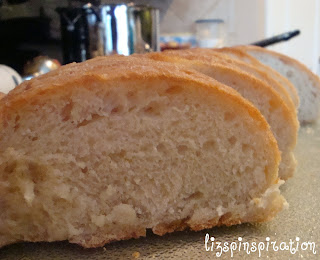 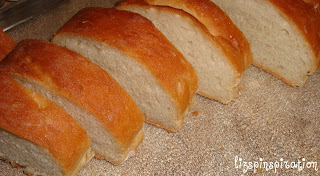 The golden crust was just beautiful. The bread inside was very soft. As was mentioned in the comments on the author's post, it is a dense bread. It is very soft and the crust has a slightly sweet taste to it. I wouldn't immediately classify it as "french bread" though. It is not the same texture and doesn't have as much of the thick chewy crust as French bread usually does. I think allowing more time to rise would create more air pockets and move it closer to what I think of as French bread. (Although when I looked it up the definition said "white bread in a long thin loaf" so I guess technically it is.) My husband loved it. We ate the whole loaf tonight. I sent the other home with my sister.

Total cost: $0. I had everything already on hand.

Total time: It's called one-hour French bread. It took about 35 minutes to prepare and then 35 minutes to cook. Just over one-hour. Maybe I'll get it under an hour next time.

Final verdict: Next time. There is a next time. It might be tomorrow. So good. I will definitely use this one again. With the sweetness to the crust, I think it could truly make some excellent French toast in the morning--if there were any left.