Don't they look delicious?? I decided at the beginning of the week I was going to make these but I kept putting them off until today. It was a chilly day and after freezing the morning away at t-ball the boys and I decided to stay home. While they caught a movie I put these together.

They were not my typical baking recipe--mostly because it has a lot of steps.  Turns out I had to take a few shortcuts, too. First, I didn't have enough butter so I had to sub 1/3 of the butter with butter-flavored shortening.  Next, my dark brown sugar was hard as a rock so I had to give it a moisture treatment in the microwave. Then, due to the untimely demise of my food processor after it leapt from the cabinet a few weeks ago, I had to process this in my chef's chopper. The chopper is about half the size of the processor so I had to make the crust in two batches.  The boys got interested when I got the chopper out and they came to the kitchen for a while to pulse the button for me. I didn't have quite a full pound of raspberries so when I put the filling in I kind of smushed the berries to spread them out a little.

I baked them as directed and they smelled so good.  I knew these would have to cool and set a while so I didn't even try to taste them warm.  After 30 minutes or so I lifted them from the pan by the parchment and set them on a cutting board to cool further. I used a knife to gently pull the parchment from the edge of the gooey bars while they were still warm. (After that bread fiasco with the parchment I wasn't taking any chances.) 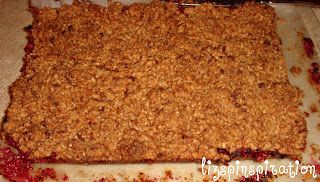 When they were about 45 minutes out of the oven we just couldn't stand it anymore and had to try some. I was a little nervous about the stability of the bar. In my head I had envisioned more like a cereal bar (think: Nutrigrain style sturdiness) but these were pretty crumbly and fairly fragile. But I was eating from the edge that didn't have as much of the bottom crust. They were delicious, just as I had suspected they would be. More dessert-like than breakfast food. Eating them slightly warm and gooey was almost like a cobbler-style dessert.

After they were well cooled and set I cut them into bars. Now the crust was sturdier--not Nutrigrain sturdy, but able to handle without falling apart. The topping is still pretty crumbly. I will probably eat these on a plate with a fork--not handheld. 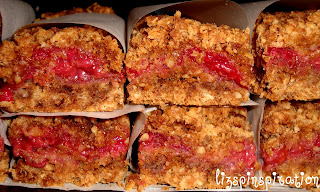 Total cost: $5 for raspberries. Clearly could have spent more if I had planned better and replenished my staples--butter, brown sugar, etc.

Total time: With all the extra steps I took it was around 45 minutes to assemble everything and then an additional 45 minutes for the final baking (which has to be babysat and turned every 15 minutes.)

Final verdict: I just think they are so gorgeous. They would make a terrific gift as they have such a great presentation. They are very tasty but I will probably eat/serve them as a dessert rather than a breakfast. Prep was easy but time consuming. This is NOT a just throw it all together type recipe. Try it if you love baking. Would be easy to sub with any other berry or even apples and cinnamon.