Don't these look delicious? All that gooey cheese. Yummmm.

This was a quick and easy dinner to throw together tonight. It even says on the original post to use whatever variations sound good to you so I didn't follow the recipe exactly. I cheated and used a ton of canned stuff. Here is what I put in mine: 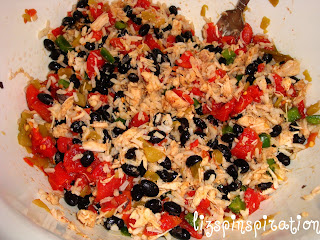 I used the smaller, fajita sized tortillas because that is what I had already in the pantry, so I couldn't stuff mine as full as Mel over at Mel's Kitchen Cafe. And, I'll admit, my tortillas weren't even really that fresh. I followed Mel's directions and rolled them up before placing in the skillet and the first one tore a little because it wasn't fresh. Oops.


After that I just warmed the tortillas in the skillet first to soften them up a bit. Pulled them off, loaded them and rolled them, and then popped them back in the skillet. Problem solved. Also, I only completely folded the four sides for the boys wraps. I wanted mine to be stuffed full! 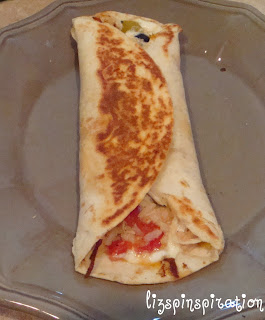 Total cost: I don't really know. The only thing I had to go out and buy was the green bell pepper. All the other ingredients are staples in my pantry. (Including the avocado. Have I told you before how much I LOVE avocado? My day isn't complete unless I have had some delicious avocado.)

Total time: These were fast to make. I did make the rice the traditional way, but you could easily buy some of that microwavable or minute rice. Once the rice was cooked, the rest of the meal went together in about 10 minutes.

Final verdict: They were good. They were not unlike some other dinners we have eaten. We are burrito loving folk around here. My husband, until I told him, didn't even realize this was a new recipe. I would never added the bell pepper on my own and I would usually use either a Tex-Mex rice or my favorite for burritos--Cilantro Lime rice. However, the surprise here was that BOTH the boys ate them AND liked them. Even non-eating-child ate them--he actually ate more than boy-who-eats-anything! And, the real reason this is a winner: Non-eating-child, also known as boy-who-never-sleeps-and-never-stays-in-bed, after eating this, went to bed and to sleep. Immediately. Didn't even get up once. This must have magical powers. I am going to have to try this again and see if it works the same.