First up--apple and honey pork loin in the crock pot. I used Gala apples instead of red delicious, because that is what I had at the house. I don't think it made a difference.

It was easy enough to prepare--just honey, apples, pork loin, and cinnamon. Put it in the crock pot and let it cook all day. It smelled wonderful. When Wibzy and I came home from our errands in the afternoon he ran to the kitchen and started asking for donuts. (Ha! When I make homemade donuts, they have a little cinnamon in the batter so the house DID smell a little like donuts.)

When I opened the crockpot that afternoon I was a little nervous. The whole dish was this ugly gray color. I don't think the pictures do it justice. It looked ashen. I thought it may have been cooked beyond the crisp into just ashes. I tried to capture it on film for you: 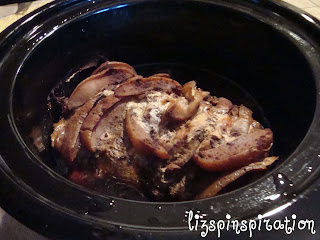 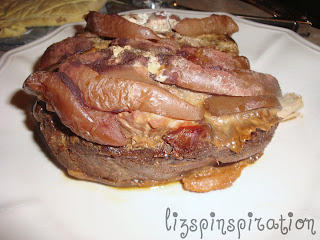 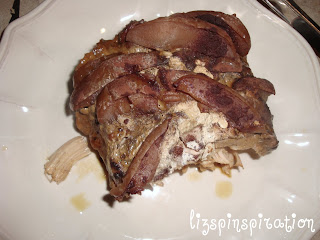 Looks appetizing, right?
After I cut it opened we were all relieved to find that the meat was white and moist, and oh-so-flavorful.The juice was golden. 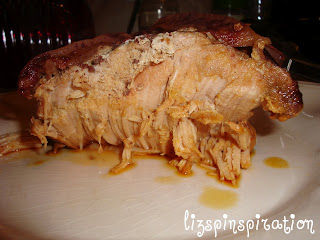 I thought the apples would be able to be served as a side dish, but they had cooked so long they just fell apart. Once we sliced it up the gray color was no longer so obvious, and with the delicious taste it didn't really matter anymore. The apples basically just fell apart in the pork and in the sauce so we cut ours up and drizzled it with the apple-y sauce. There was no liquid added to the cooking process but it surprisingly made a lot of broth/sauce. Both the boys ate the pork and the apples.

Final verdict: We will probably make this again. It had a good flavor, few ingredients, and was easy. Just don't let your people see it first coming out of the crock pot!

Well there is no way my family is going to eat 2 pounds of roasted carrots, so I had to downsize this recipe a little. I was looking for a quick and easy vegetable to serve alongside my pork and I thought the honey would tie the two together. I love the sweetness of reduced balsamic vinegar so I was all for this one.

The kids didn't love it. the carrots were still crunchy and they were expecting them to be soft. I don't know that they liked the balsamic taste to them. 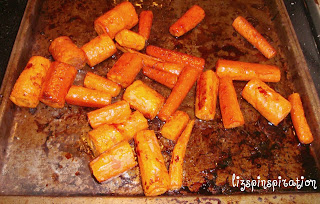 It was hard to get a good picture of these because they were so orange they were messing with my auto-focus!

Total time: 10 minutes prep (only because I used whole carrots that needed to be peeled and cut. Faster if you use baby carrots.)

Final verdict: Not a kid dish in this house, but I thought they were good. Probably won't get used much around here.

7-Up biscuits. I have seen this one come up often on Pinterest.

I actually have made this a few times but never blogged about it. I first made them way back before this little blog was even born. They are sooo good. But since I have made them over and over I decided to tweak them a little this time.

Here is what I did:

Mix everything together as directed in the original. Where I changed it up is at the kneading. I didn't have time to clean up the mess kneading bread on the counter makes so I decided to skip this step. I melted the butter in my 9x9 pan in the oven. I mixed everything together in a bowl and then dumped it into the 9x9 pan on top of the butter. Spread the dough out evenly with a spatula. Then I took my pastry scraper and scored the bread into 9 squares. Not only did this avoid the mess of kneading on the counter but I also ended up with evenly sized pieces and no scrap leftovers.

Bake as directed. When they were done they popped right out at the scores without any problems. Hooray for shortcuts! I didn't have the smooth tops that rolling them out would have given me, but the taste was exactly the same. My husband and kids love these biscuits. The first time we made these, the pan was gone before we even sat down to eat.


I am a little passionate about bread. Around two-three years ago I stopped buying refrigerated breads, biscuits, doughs, etc. It is so easy, much more delicious, and you avoid so much processed ingredients to create your own.  (I'll admit, though, in a pinch I will resort to the premade stuff--but I can taste a difference now.)  I have a collection of my favorite dinner rolls, french breads, biscuits, pizza dough, etc. These are definitely in the list. (And I actually did skip the premade biscuit mix called for in the recipe and used the old fashioned flour, baking powder, salt, shortening method.)

Total cost: I had everything on hand already, so they were basically FREE!

Final verdict: I think you know--I've raved about them enough by now. I know we will make these again. (From a fat/calories/carbs standpoint, they are not the healthiest think, so TRY and limit yourself--ha, ha! Just try! Bet you can't!)