I love the posts over at makeit-love it because they always have great, easy to follow tutorials. I recently came into a serger. I have been interested in learning them and I acquired the family hand-me-down serger from my sister about a month ago. I remember when my mother bought this machine when I was a child. I am going to guess it is somewhere in the range of 20-23 years old now. I remember going down with her and buying fabric from some warehouse to make a whole new summer wardrobe for us. I picked green and white stripes. We were going for the units look.

Now, I'll be honest here--it sat in the box for a few weeks before I even thought about getting it out. I wasn't quite sure where to start--project wise. This tutorial I had pinned a while back was a good confidence booster. So I decided to start by just learning how to thread the monster.

Here she is, still boxed. 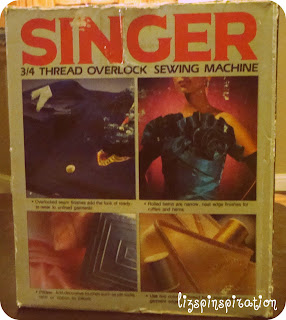 Something here I would like to draw you attention to is the beautiful teal prom dress on the side. I am drawn to this picture. There is a time in my past when I would have died to wear something like this!
And then I worried we might have an instructional problem when I saw this. Hmm. Sure hope there is a book in here. 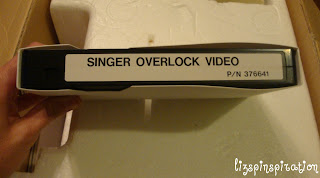 Luckily, there was. Looks complicated, but armed with my knowledge from makeit-loveit, I decided to dive right in. 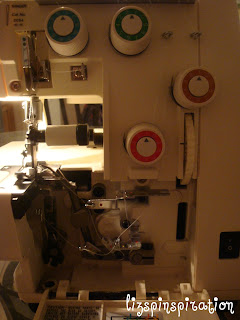 And. . .  success! Well, I got it threaded like the picture at least. Now to see if it works. I grabbed some scrap out of my stash and started running it through to see if this beast was in working order. The first couple runs were not so smooth and my thread kept breaking. Here's the tricky part--I didn't know if the thread was breaking because I had threaded it wrong or if it was because the thread was old. A phone call to my mother revealed that the thread on this machine was the ORIGINAL thread!! Oh dear.

Turns out I also had one of the threads wrong. It went over when it should have gone under. Once I got that fixed and fuddled with the tension a little bit I had a pretty good seam going. Time to go to bed.

Final verdict: The makeit-loveit post is fairly generic--as it should be because all machines are different. I couldn't have done it without the book I found in the bottom of the box.  But the most important thing about this pin was that it gave me some courage and motivation to get that serger out of the box and working.

Thursday was crazy sock day at preschool. Izzy (as he is asking to be called today--its a pirate name) doesn't have any crazy socks. They just don't make lots of crazy socks for boys like they do for girls. I had bought some fun socks a the dollar store a while back because I thought they would make cute sock monkeys. Lucky for Izzy I hadn't actually got around to making sock monkeys because they were now going to be his crazy socks. But how to get ladies-sized socks to fit a 2 year old? 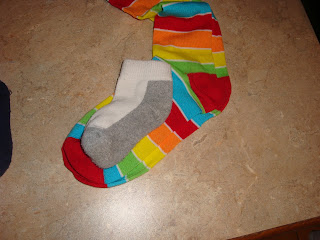 I thought about cutting them off at the heel and sewing a toe seam but I worried they would be too wide in the foot and be uncomfortable all day smushed in his shoe. I couldn't take them in width-wise because the I'd end up with a seam somewhere on the foot. That would be maddening to live with all day!

I started with the two crazy socks and then I dug up some little boy socks who had lost their match long ago. 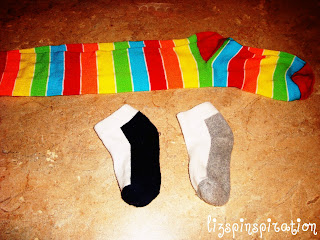 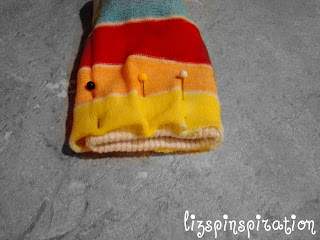 Here they are all sewn up! 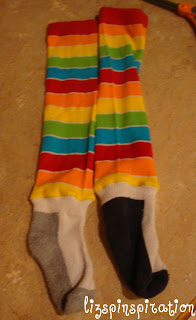 He was really excited to see them in the morning. He loves the bright and colorful things! 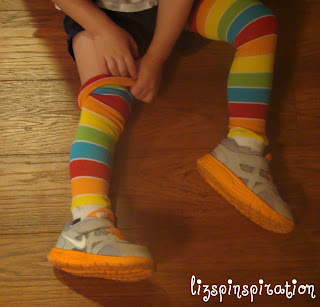 However, when it was time to leave for school, he started to worry a little. I reassured him that all his friends and teachers would be wearing silly socks too, but it wasn't enough. So I dug out a matching pair from my craft stash and we went to school together. 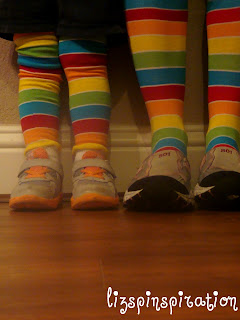 Email ThisBlogThis!Share to TwitterShare to FacebookShare to Pinterest
Labels: accessories, clothing, cool mom, for the boys, kid fun, parenting, project by me, sewing