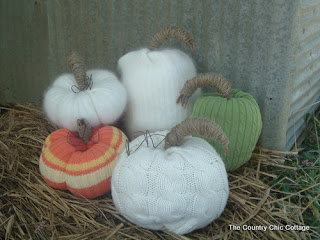 Getting in the fall spirit around here. Since it is still in the 90's I need something else to do around here with all those sweaters. Sweater pumpkins it is!

Last week, I hit up a couple thrift shops looking for some pumpkin-y sweaters. I had a little trouble at first finding orange AND in my budget. I was looking around for more like the dollar-a-piece type of items, and all the sweaters were clocking in around $3-4. Time to get creative. So I came home with one child's sized sweater, one adult sweater, a stocking cap, and a lap afghan. Today I swung by the dollar store to pick up a grapevine wreath to make stems.

I made my little orange one first. I followed the directions exactly. Time to shake it up to make the stocking cap.

I didn't want to cut open the hat anywhere since it only has the one opening.  I stuffed the hat to my liking and then decided to close it up a little differently than the first one. This time, I wrapped my grapevine stem piece in a little yarn and then used the tail of the yarn to sew around the rim of the cap. 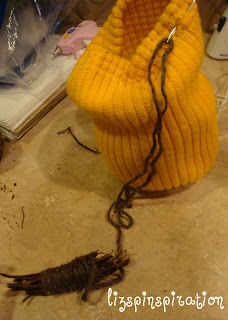 I left the stitches loose until the end where I stuck the stem in and cinched it shut, tucking in the loose edges. A little hot glue held everything in place. 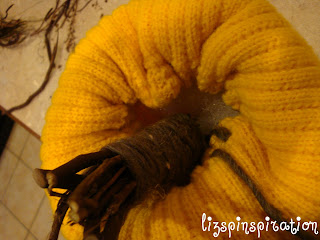 For my third pumpkin, I decided to take on the afghan. I really wanted the chevron pattern to show on my pumpkin so I was going to have to make it big. I started by cutting the afghan in half and working with one half. I ran out of stuffing so I started grabbing other things to stuff it with. There are some giant pieces of foam left over from an old, old, OLD project and then a ton of empty shopping bags. 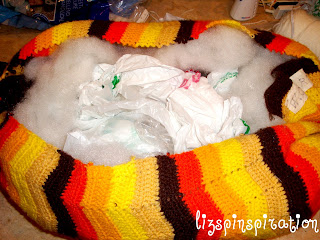 When it was time to start gluing the edges shut on this beast I decided to skip the hot glue. I wanted to match up the stripes and I kept burning myself trying to do it so I decided to sew this one shut with some yarn. I ended up having to adjust the top a little as well to get the pumpkin shape I wanted. I tucked the excess down in the pumpkin and sewed the top shut using the same technique I used on the cap.

Since I was out of stuffing, and now nearly out of shopping bags, I decided to quit at three. We'll save the extras for something else. I posted this tease picture on facebook earlier today and all your guesses have inspired me. Looks like I will have plenty to work with. 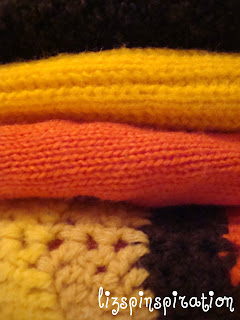 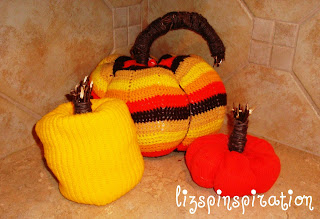 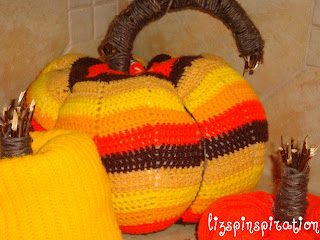 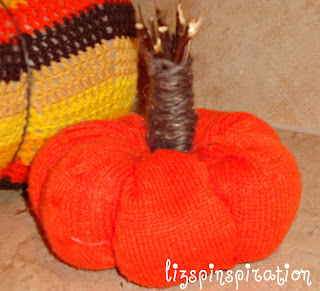 Final verdict: A little bummed I ran out of stuffing so soon. They weren't as easy as they looked at first. I don't think I would hot glue again. I would sew the side seam and bottom seam shut. Personally, I think it is just as easy and looks nicer. Plus, if you mess up, it is so much easier to rip out stitches than hot glue. Stuff through the top, and cinch the top shut. If you don't sew, however, you'd better stick with her method. Cute idea, will add a nice festive touch to the house. You could make fabric stuffed stems to make them into pillows too.