I technically did not pin this anywhere. I am sure, sure, positively, absolutely sure I SAW this on Pinterest. I really, really THOUGHT I had pinned this somewhere, but I can not find the pin on any of my pinboards. It was such an awesome trick I just had to share it and I don't want to take credit for coming up with it all on my own so I am just going to consider it a pin without a source or a picture.

My flowers from pin Pin 71 were beautiful for at least 10 days! But the lemons were not so fresh anymore. The water was murky, the top was developing some funk. I had about seven different arrangements around the house that were all in need of a little refreshing. We were having some home improvements done last week, which really put a kink in my pin projects and is why I am a little behind on my weekly posts. I actually couldn't get to some of the arrangements due to furniture stacked absolutely EVERYWHERE!! Despite this neglect, these flowers survived.

Once the house started to come back together, I gathered all the arrangements, dumped the water and lemons, and gathered all the flowers. I rinsed all the stems to remove any funky residue. I wanted to condense them into one large arrangement. I had a few extra lemons so I pulled out a large vase and sliced my leftover lemons. The stems were not long enough to arrange in my large vase without sinking. That's when I remembered this un-pinned pin. I created a grid on the top of the vase with transparent tape. 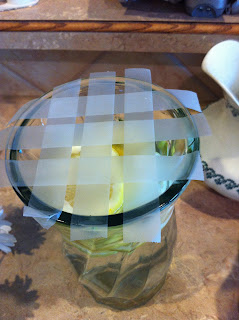 Starting in the middle, I trimmed the old ends of the flowers and stuck them about 3-5 per grid opening. I just worked from the middle to the edges all the way around. 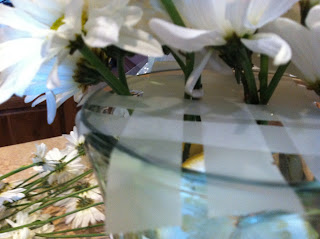 This trick worked fabulously. My brain was in too much of a cluttered state to remember to take an after picture! But it was gorgeous. The grid held the flowers perfectly and kept them from sinking which made them so much easier to arrange.

As for the flowers, I am not sure if it was the lemons or the fact that I bought these flowers from a wholesale market, but they were gorgeous for at least 12 days! Even when I tossed them at least half of them were salvageable.

Final verdict: Awesome little trick. I will definitely use this again.
Posted by lizzy at 10:01 AM