So I originally pinned this as a joke. I pinned it to my "free smiles" board. But one day, when I was at my wit's end with the boys I decided I was going to spend an entire day whispering whenever I felt like yelling.

I guess my whisper isn't scary. I know my mom's was. I think all kids should have a little healthy fear of their parents, but I guess my kids aren't scared of the whisper. HOWEVER, it actually was a very effective strategy for multiple reasons:

1. Yelling escalates any situation. It releases adrenaline that ramps you up, makes you angrier, makes my face turn bright red. Whispering doesn't have this physical effect. So the situation doesn't escalate nearly as fast.

2. Each time I needed to whisper to them, I had to call them over to me which meant they were leaving whatever situation it was that was getting them in trouble. 9 times out of 10 they didn't go back to whatever it was they were doing.

3. A lot of my kiddos misbehavior is attention-getting at times when I am occupied, i.e., dinner making. Calling them to the kitchen for a brief minute gave them a little attention. They giggled at the whisper in their ear and I got to give them a little bite of whatever was cooking.

4. No one gives you dirty looks in public for whispering at your kids like they do for screaming at them. You can say anything you want in a whisper and no one will know. (And the tickly whisper makes my kids giggle so the general masses think I'm being sweet and silly with them. I know the truth.) 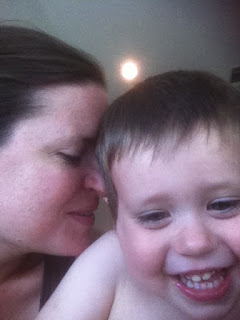 Final verdict: Overall, it is not a strategy I could do 100% of the time, and it wouldn't be effective if I used it all the time either. But it definitely opened my eyes to the degree of escalation that was occurring once the yelling started. I am surely using it as one of my tools in the great toolbox of discipline.
Posted by lizzy at 3:00 PM