Put two TBS of vanilla extract in an oven-safe cup/bowl, then place it in the oven at 300 degrees for one hour. Within twenty minutes the whole house smells like Heaven. It's actually a common realtor trick.--says the pinner.

I was needing some inspiration to get housework done and a good house smell usually gets me going.  Twenty minutes in, I did smell vanilla but the scent was limited to just the kitchen. At around 40 minutes I could smell it in the adjacent living room. But never did the smell penetrate the entire house. And the minute I turned the heat off, the scent disappeared too. I did not leave the oven heat on for the full hour. Somewhere around 35 minutes, the vanilla was fairly reduced and syrupy and--I'll admit it--I was chicken. I was really afraid it would start to burn and the smell of burned vanilla was just not something I wanted. I bet that smell WOULD penetrate the whole house! 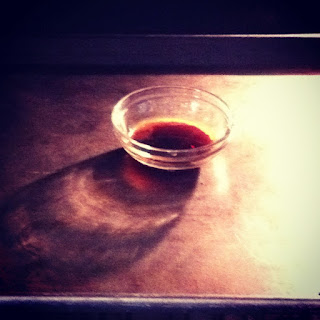 Total cost: $0. I bought a big bulk vanilla extract at Costco a while back.

Final verdict: It was a nice smell for the time while the heat was on, but I wasn't overly impressed with it. It would be fine in a pinch to freshen the kitchen--maybe if a larger volume was used I could leave it on longer and the whole house would smell good too. For now, I'll just stick to my Scentsy warmer.