A tutorial on how to sew bias tape on correctly. I never knew I was doing it wrong? hmm.

Clearly I was because mine never looked this good.

One of the easies baby gifts I like to make is to sew pretty ribbons onto plain white birdseye diaper cloths. Yes, babies are just going to puke on them anyway, but mama's got to have something cute to toss over her shoulder while getting puked on in public at least. I like the ones with the seams down the middle because then I don't have to pin it and I get perfectly straight lines. If you've been with me a while, you know I am a short-cut kind of gal. I really just prefer to pin to Pinterest.

So, I take these ribbon scraps and sew them down each side along the middle seams and then trim the bottom and top edges with bias tape. My friend has a new little girl in need of some pink so I spent last night whipping a few pink things up for her. I already had this partially ready. I had leftover ribbon and trim from another project that I had tacked on to the cloth a while back when I still had the right thread in the machine. I didn't have any bias tape so it sat unfinished in the project closet for quite a while.

Magically, while looking for my zipper foot last week I came across some pink bias tape. Pulled this out last night and decided it was time for me to grow up and learn how to use bias tape correctly. The tutorial was easy to follow and I was thankfully just sewing two straight lines.

It was the most beautiful bias tape I have ever sewn. End of story. 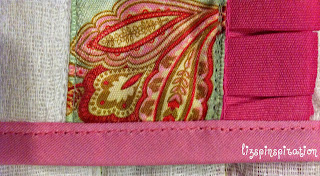 Total time: That pinning is work, you know. 20 minutes.

Final verdict: It really looked much better. I just never knew I was doing it wrong! I feel so smart now.
Posted by lizzy at 9:10 PM