This site listed a bunch of ideas for making car traveling with kids easier.

I didn't use all her ideas, but a few of them came in super handy for the ride. First, see that turquoise square bucket in the picture? That fits so perfectly in between car seats and I just happened to have a whole slew of them in the playroom. We packed up our red one with books and toys and put it in between the seats for the ride so they would have easy access to help themselves to their things. This was good and bad. Good because they could reach their things. Lu was really good at putting the toys back in the bucket and helping his brother reach things he wanted. Bad because Wild Bill could reach things when he was mad and would just start grabbing and throwing anything and everything he could get his hands on. This bucket provided an endless supply of ammo. Also, the placement of the bucket made it hard for Lu to reach his buckle to put himself in his seat. Not a deal breaker but something to consider. I think this style of bucket would work even if you didn't have two seats to wedge it in between. It is sturdy and wide so I don't think it would slide around or tip easily. 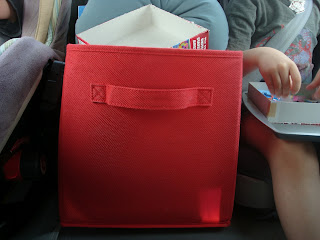 The second tip I took from this site was about snack baskets. I purchased each boy a basket from the dollar store. Then I loaded up one of our large baskets with our trip snacks. I filled each boys small basket with snacks and juice boxes and placed them on the floor in front of their seats. When they wanted a snack it was easy to reach, gave them a selection while still allowing me to control their options (as opposed to the unlimited gas station selection or eating 5 packages of Goldfish in a row out of the main bucket). This worked out really well for us. There was zero fighting over who got the last package of cheddar bunnies because neither of them really knew what was in the other's basket. Once we were in the condo I replenished their baskets daily and they chose their snacks from here. This is a little like we do at home only they share two big baskets in the pantry.

Those were the two items that I took from this blogger. The other things that helped us out for the trip were:

1. They each got to pick out a toy at the dollar store earlier in the week but not play with it until the road trip. I put these in the red bucket and it was the first item they pulled out. I think they each played with them for the first hour or so. Dubya picked out the little mermaids (his current obsession) and really played with them the entire trip. Slept, ate, and bathed with the things. One of them is balding now because she had so much love. Best dollar he ever spent.

2. I let the boys pick out a new CD at Target. They were dying to listen to it but I made them wait until the trip. Jake and the Neverland Pirates soundtrack--good for a beach vacation.

3.  We had a garage sale last month. In cleaning out the closets I found my old Discman. You can bet that puppy got a lot of use on this trip. There is only so much Jake and the Neverland Pirates soundtrack a girl can listen to. One spin on the car player and it is into the Discman with you. As a bonus to me, I loaded the disc onto my iPod too so that one boy could listen to it on the Discman and the other could use the iPod. Everyone was happy.

4. They did each get a turn on the iPad each way. We actually loaded a new game while we were gone so on the return trip it was all new fun.

5. A big stash of wipes and hand sanitizer nearby kept everything, and everyone, relatively clean.

Total cost: $2 for the snack buckets.

Final verdict: They both worked out great. The toy bucket had its disadvantages and may or may not be making an appearance on the next car trip--which is no where in sight currently. The toy bucket was nice to have around. Once we got to our destination, it was easy to carry in and kept the toys corralled instead of spreading all over the condo.
Posted by lizzy at 9:10 PM