This toothpaste trick promised to fix the dvd's and cd's that were scratched and skipping.

Since L got his first stack of CD's many, many years ago I have never let him have the original. I always burn him a copy so that if it was scratched or broken then I could just burn him another copy. I continued that practice when W came along. L has always been very particular about taking care of his stuff so it was never really a problem. W, however, could care less about being cautious and his CD's last about a week before they start skipping.

When W woke up from his nap today he was asking to listen to a Laurie Berkner CD that is so sadly damaged I don't think a single song could play all the way through. He just kept shaking his head and saying, "It's skippy," before I even put it in the player.

We happened to have the secret ingredient already in the bathroom--the kid's Crest. 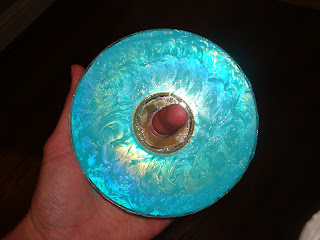 I scrubbed it up, cleaned it off, and popped it in the CD player. W was ecstatic to hear his songs playing. Uh oh. Song 4 started skipping. And so did a few others after that. It was improved dramatically, but not perfect. I decided to give this one a double treatment. After the second time, it worked perfectly and played without a skip. Awesome trick.

Total cost:$0 (If you are looking for kid's Crest, I buy it at the dollar store regularly $1 for a medium sized tube or Target has had a travel tube packed with a toothbrush for $1 in the travel bins since Christmas)

Final verdict: I will definitely be using this trick again and again and again. It worked fantastically. I think my father would be appalled if I told him I scrubbed a CD with toothpaste. He taught me to respect CD's more than that. Sorry Pops.
Posted by lizzy at 6:12 PM