This was labeled on Pinterest as a bath towel, but it is a tutorial for a swimsuit cover up. Either way it inspired me to make this cute bath gift for my niece's birthday last week. This pin was inspiration, er, pinspiration, only. I actually did not follow her tutorial--mostly because I didn't have any velcro. Great reason, huh? Since mine was for a little girl, I figured I would just make it pull over style. Here is how I made mine. . .

I started out with a regular sized bath towel. These things can be expensive, but I found a nice plush and soft one at Ross for just a few dollars. After washing, drying, and pressing it, I layed it out flat on the floor. 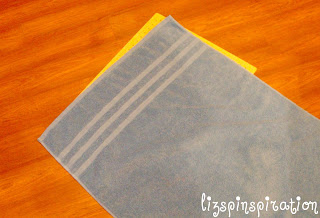 I cut of each end of the towel on the innermost big line. I cut right along one of the small lines so that I left some of the flat edge in place to prevent fraying and general terrycloth mess. Then I serged along each cut edge. 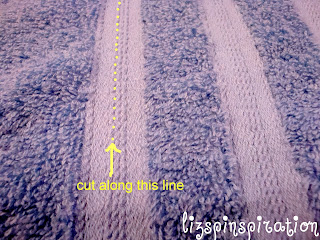 I brought the serged edges together and stitched a 5/8" seam and pressed it open. Now I had a big tube towel. 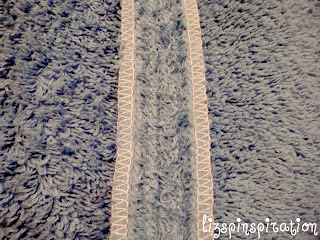 I folded a large hem down along the top opening--around three inches. Pressed and pinned in place. I stitched nearly all the way around about 1/2 inch from the edge of the hem, leaving an opening for the elastic. Then topstitched entirely around the top, 1/2 inch from the fold. I measured a length of elastic that I felt would be large enough to easily stretch so she could pull it over her head, yet short enough that it would hold the towel up tight enough.

Finally, I followed the applique tutorial in Pin 70 and appliqued a "M" on to the lower edge of the towel. Here is the finished product: 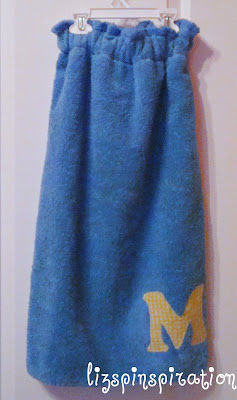 I picked up a little basket of bath goodies from the dollar store to go along with it:

I rolled it up and stuffed it down in the basket with everything else. 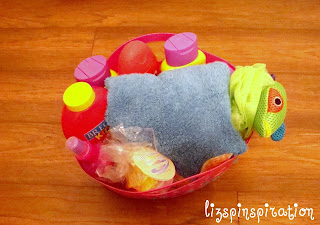 Final verdict: Cute and easy gift. Maybe a little practical for a 5 year old, but with some fun too. Poor kid comes from a practical family. Our side got her soap, an apron, a bike helmet. . . what can I say?

Here she is rocking her towel (or as 3-dub calls it--her cookie monster dress). 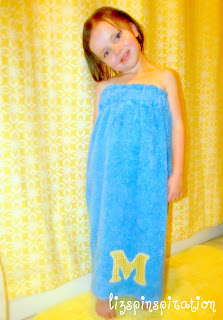