Here is the first of three Thanksgiving posts!

Martha Stewart shared a recipe for some no-knead dinner rolls. I felt she was trustworthy enough to take this to Thanksgiving dinner without a test batch first.

I mixed these up the evening before Thanksgiving. We always "run" (or something not at all like running) the Fort Worth Turkey Trot on Thanksgiving morning. I didn't want to be rushing to put something together that day so I let these sit in the fridge overnight. When I was preparing them, they were rising so fast I thought they might be up and out of the pan by the morning. Luckily, they were not.

I took these out of the fridge about one hour or so before I was ready to bake them. They didn't need to cook quite as long as the recipe stated. I took them out a little early because they were getting too brown. Here they are straight out of the oven: 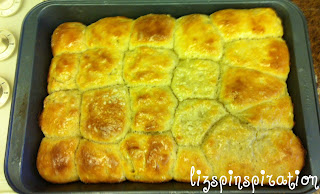 They were not smooth on top like I expected dinner rolls to be. They had a good flavor but they were very dense. Not dense in the way they would be if they had not risen, they rose and had lots of air pockets and such. I just think the lack of kneading contributed to their density.  They were more what I would describe as biscuits.  Because of their density they were very, very filling. I made two batches to feed 17 people. The second pan was not even touched until Thanksgiving round 2 hours later.
Total cost: These used a lot of flour and I had to send hubs out for more before it was too late since I was making two batches.  He doesn't report back on prices. I'm guessing it was a few bucks for some flour. Everything else I had on hand.

Total time: The prep on these wasn't bad at all. Since you don't knead it most of the time is spent in the rising. Hands on was probably around 30 minutes for the two batches together--mostly spent shaping the rolls.

Final verdict: Like I said before, these were pretty biscuit-y so I won't make them again when I am looking for a dinner roll. (When I think of a dinner yeast roll I think of soft and airy.) I already have a biscuit recipe that I am absolutely, positively, undeniably in love with so I wouldn't make these when I am wanting biscuits.  They did make pretty good leftover ham sandwiches.  They were sturdy enough to hold together for that. Easy enough to make for a crowd and made 18-22 per batch.  There is a good chance I won't make these again. 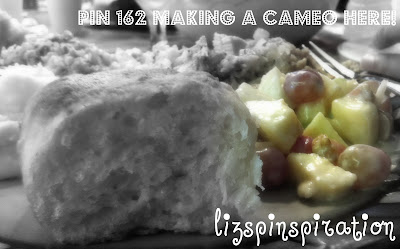