A little Thanksgiving decor to spiff the place up.

My vision for this project was a little different. I liked the "thanks" concept but I planned to use different sized filled jars. And instead of painting on them, I decided to cut out the letter and stick it down in the jar. That way I could reuse it for something else later.

I wanted to fill my jars with fall things of nature--pine cones, acorns, etc. My boys are always picking up acorns around the neighborhood so I we went on a scavenging walk. Do you know how many acorns it takes to fill 6 jars? A lot. A heaping lot. More than I found just taking a quick walk around our block.  So I had been keeping my eye out for some oak trees. A few weeks ago I decided to take little one to a park that had some big oaks. I spent a long time gathering while he played. I seriously gathered at least an hour. I was very indiscriminate in my gathering. I just scooped up anything and everything that seemed intact and uninfested.

I took them home and washed and dried them well. I sorted them into three piles: green acorns, brown acorns, and caps.

Later that night after the little kiddies were in bed I set about the task of gluing acorns to acorn caps. As I worked from my piles spread out on white paper towels, I started to notice something. Little piles of dirt? Turns out my acorns were infested because soon after I saw little white worms poke their ugly little heads out. Okay, that's my cue to wrap it up. I screwed the lids on the jars (very, very tightly) of already glued acorns. The rest of the acorns were quickly shuttled back outside to the patio.

In the morning, the "t" jar had these little fellas waiting for me:
Since this is a Thanksgiving project, here are a few things I am thankful for:

1. I started the project the same day I brought home the acorns. They didn't sit in my house releasing worms for days before I noticed.

I did a little googling research and found out that this is very common with acorns. Who knew? I sure didn't. I got a lot of mixed information on how they get in the acorn, what they do in there, how to tell if the acorn is infested, I don't really have any great advice to offer here on this one. I did learn this:
Totally disgusted, I had to put this project down for a few days and rethink my methods. There were about five acorns in my stash that we had collected from the neighborhood. These never released any worms. They were bigger and their caps were still on. (One website suggested that acorns that fall before their caps do so because the weight of the worm causes it to release from the tree early. True? I don't know, but a nice theory.) Anyway, I decided I would go find more of these acorns.

After searching all the public neighborhood areas without luck, I found two different neighbor houses with nice big acorns. I tried ringing the doorbell first, but with no response, I went ahead and collected their acorns. Sorry if you wanted those. Blame it on a really hungry squirrel.

I thought back to middle school science lab when we had to stick these bugs into a diorama. We froze them to kill them. I took all my acorns home, sealed them up in a big ziplock bag and froze them for 72 hours. Again, I googled some more avoiding about acorn worms. Some suggested freezing, some suggested baking. I decided to do both. I looked over my first stash as well. The green ones had never hatched any worms, so I decided to try these as well. After a good long freeze, I popped these babies in the oven for a few hours. The green turned brown but I didn't burn anything.

After they cooled, I put them back into a ziplock and sealed it. I watched it for two days to make sure there were no super charged worms that survived the freezing and the baking. Looked good. Back to work.

I still didn't have enough to fill my jars completely. I used toilet paper rolls to fill the back half of the jar. Then I cut out a letter and used a piece of clear tape to hold it in place while I filled the jar with acorns. When full, I pulled the tape off and put the lid on. 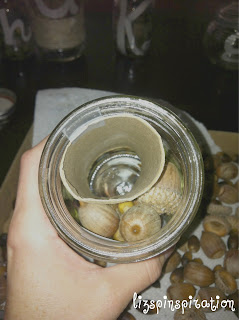 Once all the jars were full, I lined them up on my mantel. I popped a few of my leaf flowers from Pin 154 into one of the toilet paper holders. Here it is: 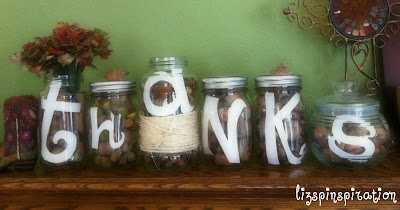 Total cost: $0
Total time: Days and days and days.
Final verdict: My Lu loves it. He asked me to leave it up there forever so we can always remember Thanksgiving. It was a lot of work. But I learned some lessons about crafting with acorns. I may nev﻿er get rid of my perfectly prepared stash of acorns either.