7Up Chicken & Rice from the slow cooker. Sounds great, and easy.

It was so simple there isn't really much to say about it.  I mixed it up in the morning quickly and let it cook as directed. I used regular rice instead of minute rice because that is what I buy. I cooked it a little too long and the rice on the edges burned a little. 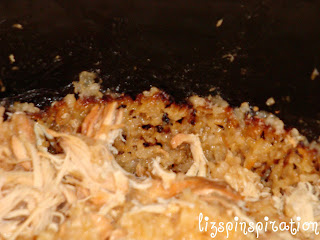 The chicken was so tender that all I had to do was stir and it just fell apart.  As I expected, this didn't have a ton of flavor--but that is not necessarily a bad thing because, number one--it is an easy problem to fix. Flavor it up with whatever you want. I would probably use salt, pepper, garlic, and some paprika, maybe some rosemary. Number two--this falls perfectly into a category of food I lovingly refer to as "toddler food." It is soft and easy to chew. Doesn't require me cutting it into teensy tiny bites, and is not full of flavors a kid would immediately spit out. 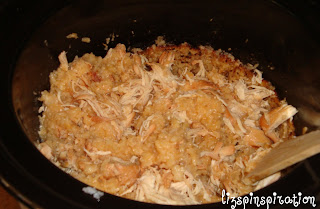 Total cost: $5 for chicken breast. Everything else was already stashed in the pantry.

Final verdict: It was good. The kids liked it, I liked it, the hubs liked it. There was nothing crazy special about it--except that everyone liked it and ate it. When you factor in that (1) everyone ate (2) I made it for $5 + pantry staples and (3) I barely had to do any work, I think that makes it a winner. Who isn't looking for easy to throw together dinners that everyone will eat? Will we make it again? I haven't ruled it out. It may be one of those recipes that I keep stashed in my back pocket for when we are busy and the pantry is getting bare. A good staples dish.