I absolutely love this gift idea! An apple and a little jar of homemade apple dip. Her recipe for apple dip sounds delicious, but I was giving these to some teachers today and I didn't want them to have to refrigerate it immediately. So while I still want to try out her dip (cream cheese. . . Heath bits. . . mmmmmm. . .) I substituted this recipe from DirtyGourmet. While I do cook a lot and am not usually intimidated by new recipes, candy making is not an area I have worked with a lot. I am terrified of burning the sugar! A few years ago I made an attempt at a few Christmas candies that just turned out a mess. I pretty much stay away from boiled sugar. But I was feeling brave so I jumped right it.

Then I jumped right out! Just as the sugar was starting to brown I pulled it off the heat and finished off the recipe and ended up with this: 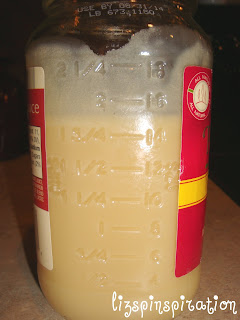 Doesn't look much like caramel, huh? Let me tell you--it didn't smell much like caramel either. So I took a deep breath and started over. When I was making ice cream over the summer I stocked up on sweetened condensed milk, so I pulled out another can. Before I started to boil the sugar, I got on my frined Google and looked at some pictures of browned sugar. As I had suspected, it turns out it needed to be much, much, much browner. So with the bravery of Google pictures, I started back in. Second batch was a success! 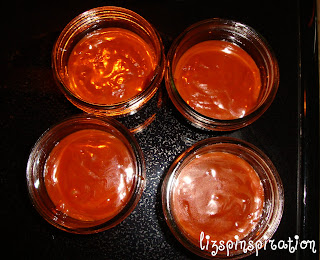 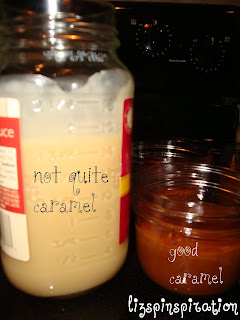 After it was cool enough to eat I sampled some. Then I let my husband taste some. He is not much of a participant when it comes time to lick the bowl clean, but after one taste of this he came into the kitchen and scraped every last bit off the wooden stirring spoon.

I filled 4 half-pint jars about 3/4 full and let them cool. The next day I packaged them up with a nice fresh green apple and sent them off to school for the boys' teachers. Luckily, I had only three teachers to gift, so I got to keep the last jar for myself. I sat down and had apples and caramel for lunch by myself yesterday! Today after school this is all Big Brother wanted to eat. I'm rationing it out! Looks like I am going to have to make another batch soon. Good thing I have a stock pile of sweetened condensed milk. 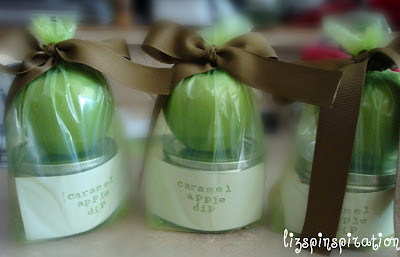 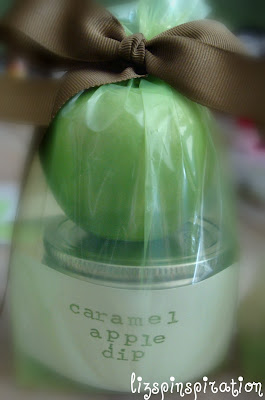 Total cost: The only item I had to purchase was the apples, and I actually sent my husband out for them. He didn't report back on the cost.

Total time: It took me about an hour but that was for two batches and a little google searching. Plus I washed and dried all the jars before I started cooking. 15 minutes to package them up.

Final verdict: Dip was very, very good. Better than the store bought stuff. I actually have some in my fridge and taste tested side-by-side. Makes a cute and easy gift as well. L asked if we could make some for the principal, his secretary, the school bus driver, his Sunday school teacher, . . . looks like I'm in the boiling sugar business now.