When I first saw this pin I thought it would be a great way to prepare tacos quickly--assembly-like style.  After I planned the meal for this week I started to read through it and all the comments. I immediately started to reconsider when I read all the comments stating how soggy the tacos were. But a few comments later people started remarking about how the tacos stayed together so well. They did not break when you bit into them. With young children, crunchy tacos are always a challenge so I decided to go ahead with the plan. If these truly stayed together then this pin could really be something special.

The recipe made 18-20 tacos!! My family of 4 wouldn't eat that many so I halved it. That meant I ended up with a 1/2 can of beans and 1/2 can of tomato sauce leftover, but we can probably find a use for those somewhere. It was easy to mix up. I had a little over 1 lb of meat so I added a little extra tomato sauce to moisten the mixture up a bit to help it combine. I filled 12 taco shells about 1/2 to 3/4 full. I could probably have filled them fuller, but again, I knew my kids would turn up their noses if there was too much meat in their tacos. 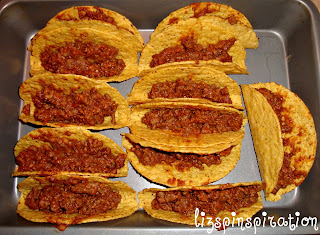 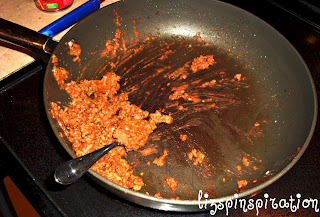 I also left out the cayenne pepper because I knew my little ones would not eat it if they were spicy. I underestimated how much Colby jack I had so I topped off mine with a little Colby jack and some freshly shredded Monterrey jack I had. After a sprinkle of chopped cilantro these were ready to go in the oven. 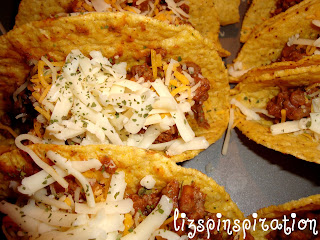 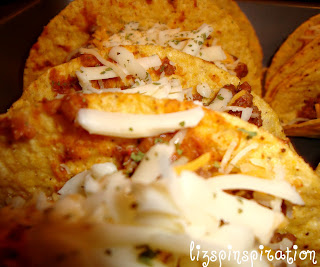 Ten short minutes later I pulled these yummy-smelling babies out of the oven toasty and melty. 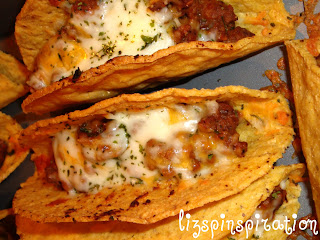 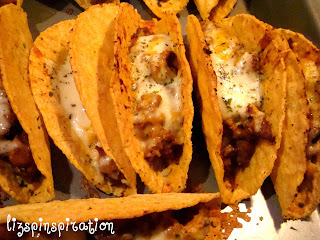 They were really, really tasty. You can see in the pictures that my taco shells were not packed tightly together. They were crispy almost the whole way around. The bottom 1/3 was softer, but not soggy. The ultimate test here, though, is breakage factor since that is what ultimately sold me on this dish. Guess what?? Not a single taco broke. Big L ate a whole taco and not one shred of cheese, crumb of shell, or dash of meat fell out of the taco. He was waving it around as he talked and the thing stayed together. It was slightly amazing. This is life-changing for tacos in my household! Lil W didn't bother to eat that night. He said he didn't like "burnt tacos." That little non-eating child doesn't know what he is missing.

With lean ground beef and fat free refried beans, this dish was filling without being crazy in calories. I also completely forgot to top with all my favorite taco garnishes--lettuce, tomato, sour cream, guacamole. And they were so tasty even without it. I had halved the recipe because I was afraid leftovers would not keep because then the shells really would be soggy. Not to worry now because my husband ate 9 tacos! He thought they were that good.

Total time: These were fast! Prepped and baked in about 30 minutes. Great for weeknights. If you were really in a hurry you could substitute prepackaged taco seasoning for all the herbs.

Final verdict: Winner, winner, taco dinner! I wish I had known about this "no-breakage" trick when my kids started eating real food. We just may start having tacos more often. The recipe itself was delicious so the breaking thing is just a bonus. And the leftover meat and beans has already been wrapped up in a soft tortilla and devoured so I guess I only have that 1/2 can of tomato sauce to deal with.