This pinned picture is linked to http://www.belleamour.co.uk/2011/03/crocheted-love/ but the actual tutorial lives over here: http://saltforthespirit.blogspot.com/2009/02/itty-bitty-crochet-heart-tutorial.html

One of the local craft stores was having a sale on yarn a few weeks ago. I was drawn to the colors in this yarn and picked up the whole skein for $1. I decided I needed to do something Valentine-y with it. I decided to crochet up a little Valentine decor. Using the little heart tutorial I started by making a bunch of little hearts. I played around a lot with the basic pattern and tried bigger and smaller hearts. Some of those worked out, but others didn't. I ended up with 13 finished hearts. I made some crochet lace on the fly. I first made a chain long enough to drape along my mantle. Then I did a (sc, ch2, skip 1 ch, sc) all the way down the length of the chain. When I got to the end, I turned and did (sc, ch3, sc) in each space made in the previous row.  I whipped up four little tassels to use to tack up my chain. 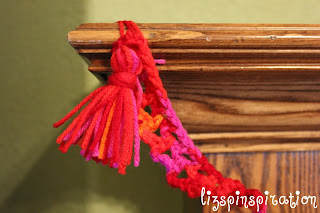 I tacked the chain and tassels up on the mantle and gathered all my hearts. They were a little spread out because I had been making them randomly throughout last week. 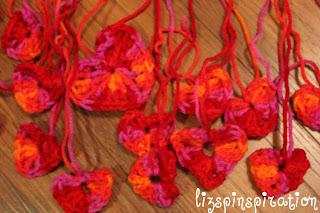 Most of them did not lay flat. I decided to iron them flat so that they would look like hearts as they hung from my garland.
﻿
﻿﻿


All that was left was to get them up on the garland. I tied them up there, each a little differently. No pattern or measuring done. 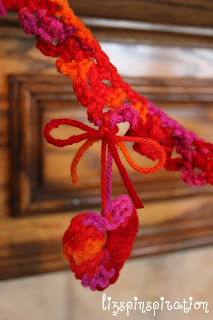 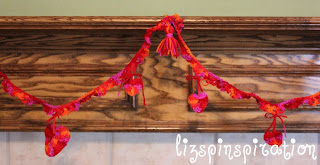 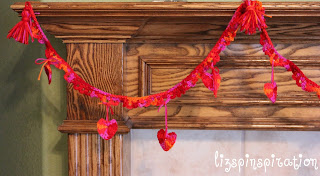 ﻿
Total cost: $1
Total time: Once I had the hearts figured out, I could make them fairly quickly--ten minutes each, maybe. The garland lace took the longest. All together I probably spent around 6 hours crocheting and assembling the garland.
Final verdict: I like it. It feels festive and I just love the color combo of the yarn. I have never decorated for Valentine's Day in my house, but this may just be catching. ﻿﻿
Posted by lizzy at 11:43 AM