How to clean Ugg boots.

I've had my Uggs a long time. I think I've had them for somewhere around four years. I protected them with water & stain repellent when they were new, but other than that, I haven't done any sort of maintenance care to them. In the cooler months, I wear them a lot--pretty much anytime I think I can get away with it. After wearing them out in the Christmas Day snow we had I decided it was time to give them a spa treatment. 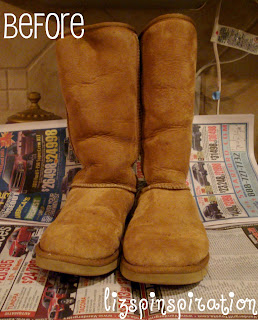 I pulled this up and started reading. My first thought was that I though it was odd that a company which seems to be a competitor for Ugg boots would be offering a guide to cleaning them. Is this trustworthy? After a little further investigation I offer you this bit of worldly information: The word "ugg" is a generic word. It refers to any type of fleece-lined sheepskin boot. The word happens to be trademarked in over 70 brands. So this particular company is only offering advice on how to care for their boot, also referred to as an ugg.

Okay. Confusion cleared and I can move forward. Many moons ago, when I received my Uggs, my thoughtful husband also bought me the tools to maintain them. For the first time ever, I dug them out.


More before pictures for you. My boots weren't terribly dirty. Some noticeable spots on the top of the foot and some dirty areas on the heels and around the top of the calf. 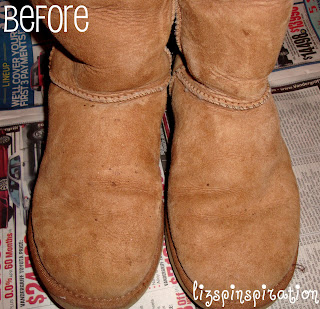 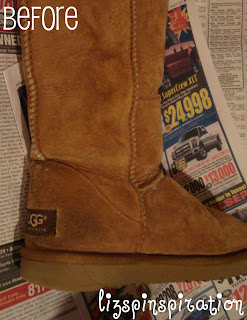 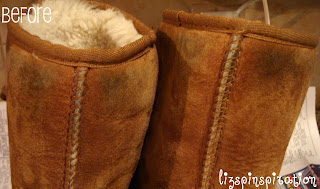 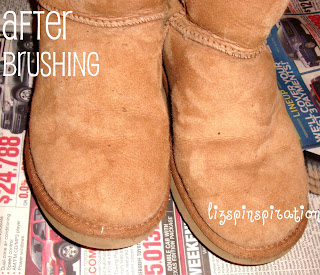 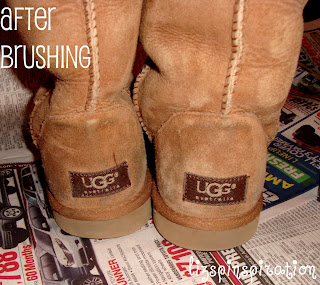 WOW! Did I even need to continue? I was a little worried about getting them so wet. Just for a little insurance, I asked my husband if he would replace them if this ruined my boots. Both the directions told me to so I jumped right in.  I soaped them up following the dilution instructions on my bottle and rinsed them off. Found a nice spot for them to dry and went to bed.
In less than 24 hours they were completely dry and ready for the next round of brushing. All the spots had not been removed. There were lots of warnings on the tutorial and the cleanser bottle about scrubbing too hard so I went a little easy on them. The dirtiest spots on the heels and calves are pretty much gone. The spots remaining are on the top of the foot. They are not water spots or anything identifiable. I don't have a clue what they could be. Probably something sticky one of my kids drooled on me. There are a few tips on the tutorial for removing stains if you know specifically what they are--ink, blood, oil, etc. I just left them since I don't have a clue. Here they are all clean--well, cleaner, at least--and brushed: 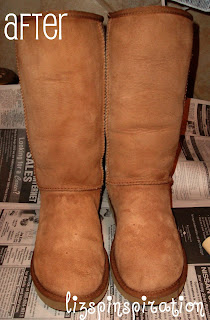 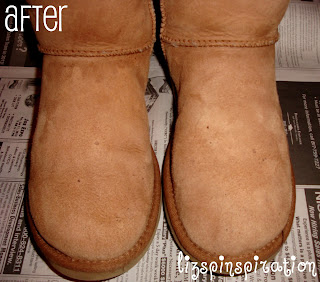 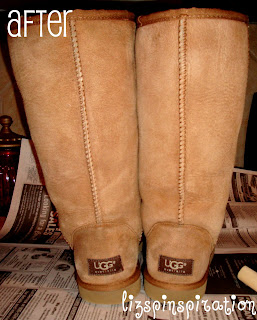 Total cost: Currently, zero. At some point, long, long ago, someone spent some money on the cleanser. I looked it up on amazon and it seems that you could spend around $8 for a bottle of cleanser or up to $25 for a whole kit.

Total time: 1 1/2 hours plus drying time. It took me a while to brush these puppies. At least they dried faster than I would have expected.

Final verdict: It seems to me that brushing them may be the most effective step for me. I'm not tromping through much mud and snow. Maybe now I will brush them more often, or at least when I start to notice they are dirty. It is probably a good idea to clean them as the cold weather moves on before they get put away for the summer. Seems that the original repellent has done its job since these still look pretty good after four years. Off to re-apply that repellent to keep these babies happy.