It took me just a few weeks to fill up this bag with toilet paper rolls, paper towel rolls, and any other cardboard roll we might come across. 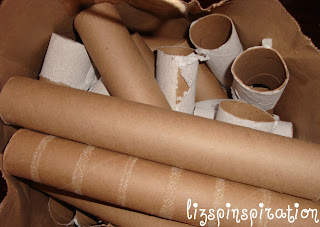 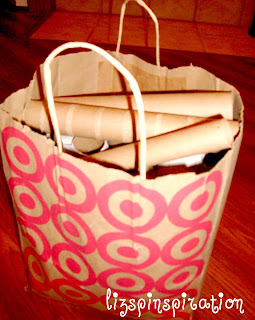 I fired up my glue gun, parked myself in front of the TV (I had some DVR to catch up on) and went to work. I cut one-inch strips and just started gluing together at random. I didn't really have a plan. I did find a really sturdy roll (I think it came from foil) that I was able to cut with a sharp knife and preserve the circle shape. This came in really helpful because it provided some super-sturdy anchors. Hours later, day one's progress was done and I was off to bed. 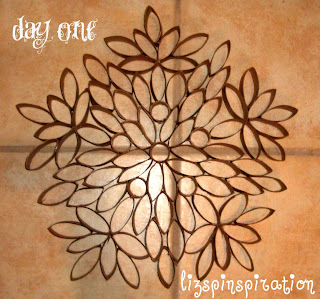 I was not able to work on it on consecutive days, so this project was not done in four days total, just four episodes of work on it. A few days later, day two progressed in the same way as day one. 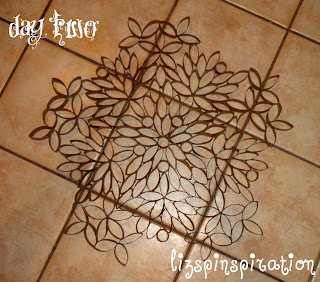 And for some size perspective, those tiles are 12 inch by 12 inch in size. This project was growing fairly quickly!

Day three I was getting to the bottom of my stash of rolls. I had already put my family on alert to refill my bag! 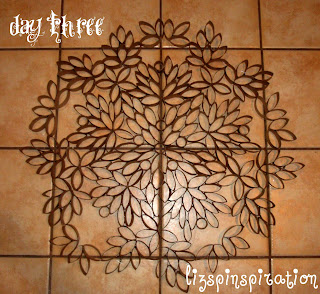 Somewhere shortly before day three ended, the project was starting to look like a giant snow flake. NOT what I was going for, so I had to really strategize to avoid the snow flake look. Worried that it might head back in that direction, I called the gluing stage complete after day three.

I picked up some spray paint at the store last week. I found some metallic style paint in "oil rubbed bronze" for a metal look without being too shiny. 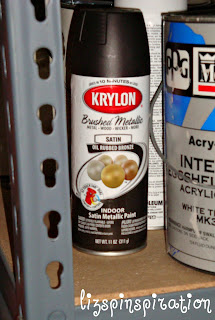 After it dried it was ready to hang up. A year ago I took everything from my mantle and have been trying to figure out what to put there next. I put this in the big empty space. Since packing away the Christmas decorations, I haven't put anything back on the mantle, so it looks really empty in my pictures. Guess I'll have to work on that next. 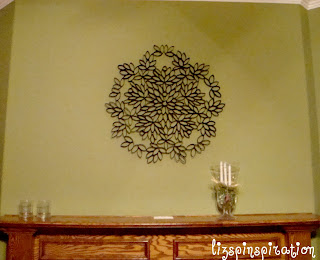 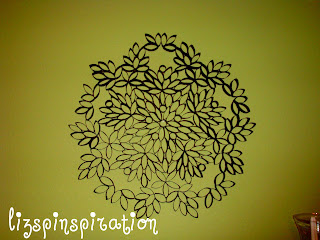 It is pretty sturdy and fairly light. It is held here with one thumbtack in the center circle.
Total cost: $5.99 for the spray paint. Otherwise, I used the entire bag of rolls, not sure how many, and about 6 hot glue sticks.
Total time: It was a little time consuming to do all the cutting and gluing. I did all the cutting and gluing over three sittings--about eight hours total. Then the spray painting was done over around 20 minutes total, split into three sessions, allowing drying in between.
Final verdict: It is an inexpensive way to fill some space. I think I like it. Up close, you can see many flaws--jagged edges, unequal heights and spacing, exposed hot glue. But hanging up so high and being painted so dark, a lot of these imperfections are not as obvious. My husband was a little unsure about the whole project from day one, but now that it is hanging, he admits he is surprised at how much better it looks that he expected. We are not completely sold on it yet, but I'm just going to let it hand there a while longer and see if it grows on us. Another problem is similar to the problem I had with the sock bun--I felt weird that people would know I had a sock on my head. Well, now I wonder if my guests will look up and think about my toilet paper rolls hanging on the walls. ﻿ 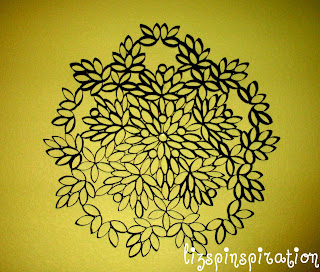