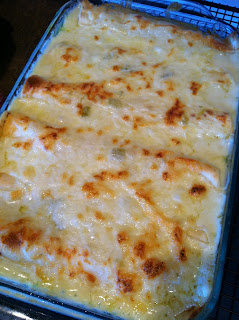 I pinned this recipe for the Pinterest described "BEST enchilada recipe ever!!" over one year ago. I love me some enchiladas and some Tex-Mex so just the thought of these made me drool. Why, then, did it take me so long to make them?? I'll tell you why.

Mr. Pinspiration has a food issue. He absolutely refuses to eat anything in the "creamy" category, specifically if it is white (think yogurt, mayonnaise, sour cream, cream cheese)--unless it is dessert (i.e., frozen yogurt, ice cream, frosting, pudding, etc.), soup, or gravy. Mr. Pinspiration went on a little trip a few days ago so I went to the store and stocked up with plans to make a few of my favorite recipes with said ingredients.
Do you know anyone with any of this sort of affliction?? Apparently they are out there. I have met one other person who excludes this category of food based strictly on appearance. IMPORTANT note to my sweet, loyal, dedicated readers:  If I have ever served my husband a recipe with one of these said ingredients--DON'T CLUE HIM IN!!! He probably loved it and it could be the end of Pinspiration! Or the end of me! Its like pushing the self destruct button on the whole ship! 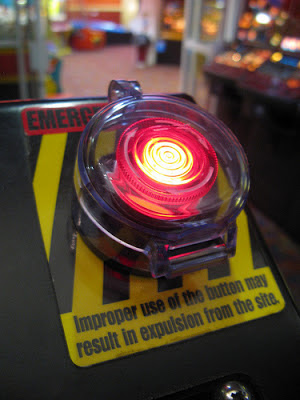 Not that I would ever try to sneak something in. Just in case I overlooked it in the ingredients. (And I do make substitutions sometimes.)

Back to enchilada talk. I used canned chicken to pull this together and it was ridiculously easy. Baked it up until it was bubbly and browning and served it up to two hungry boys.
It was indulgently yummy. I say indulgent because it really does not have a ton of nutritional value to it so it needs to be served alongside some nutrition rich foods. I served the boys some vegetable heavy Tex-Mex rice and a salad. How can you really go wrong with this much cheese? The boys loved it. They both ate their entire serving (even non-eating child.) Non-eater has actually been saying for days how much he loves enchiladas. I didn't have quite enough filling for the full ten tortillas the recipe called for, but I think I filled eight. There was more than enough sauce to spoon some over the top of the enchiladas after plating. 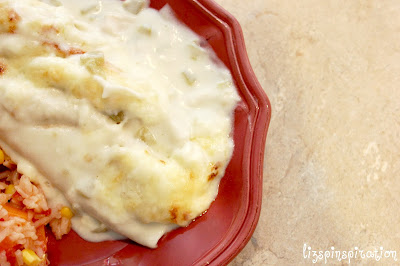 Total time: Pulled together in 15 minutes plus baking time.

Final verdict: They won us over, but we won't be putting these in the regular rotation--mostly due to the forbidden ingredients. They were good, but a bit on the bland side. Perhaps that is because I used canned chicken. Maybe if I prepared the chicken with some Tex-Mex flair or stirred in some seasonings to the filling. They were a tad indulgent for me but were a delicious treat and am not letting the leftovers spoil! 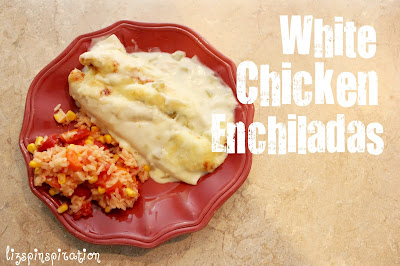