What a clever way to reuse denim! Since there was no link available, there was no tutorial available either. I had to just wing it.

My friend gave me these shorts from her daughter that had been stained but had really cute pockets. She thought maybe I could find something to do with them. I had been holding on to them a long while when I saw this pin and knew it would be perfect. 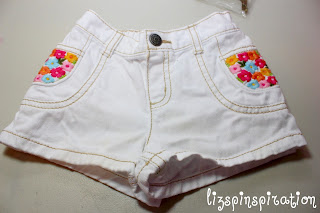 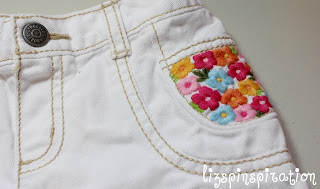 I started by laying out the shorts flat and cutting outside the large seam around the pocket so I ended up with these two pieces: 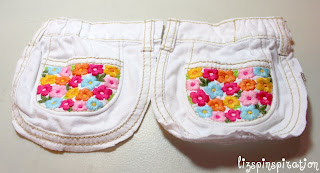 I hemmed the top edge and then pinned right sides together. I stitched around the rounded edge. After trimming flipping right side out I stumbled across a small problem (like I tend to do when sewing without a pattern and/or plan. . . )  The hardware could not be attached in this way because I had sewed completely up the sides. I had to then rip out the side stitching an inch or so.
Attaching the hardware was not easy. The type of hardware I had purchased required hand sewing. I had to borrow a thimble to hand stitch the hardware through the thick denim hem. No tears, but quite a few curse words later the hardware was attached. I had to re-sew the side seams by hand as best as I could. Phew, finally complete!  Thankfully, I was returning this to the original owner, a sweet little girl who will never notice a couple of flaws.

Total time: Maybe two hours?? I did this during my crafting retreat last weekend and the time just drifted away. . .

Final verdict: A cute idea. Next time I will try to find some hardware that isn't hand stitched on. And I will also know to leave the sides open until after the hardware is placed. 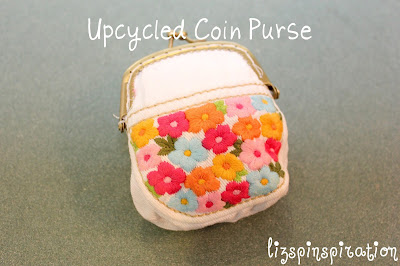