You can't see this pin on my Pinterest because its hiding on one of my secret boards. I love the secret boards feature! Now I can surprise more people. I wanted to make something to donate to an auction fundraiser at my youngest son's preschool.  I thought this was really cute and could be reproduced easily.

Step one was to find a good children's book that I did not mind tearing up. This is really hard for me because I just have a sacred spot in my soul for books. I went out to thrift one book and ended up coming home with 15! The book I chose to destroy was one illustrated by my favorite illustrator, Quentin Blake. I had never heard of the title, but I just love his illustrations so much I knew I wanted it to be part of this art piece. 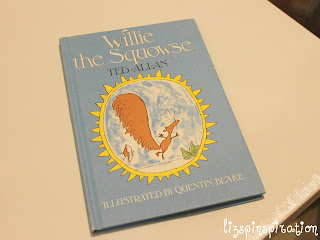 I selected the pages I wanted, and mod podged the back only to a canvas. 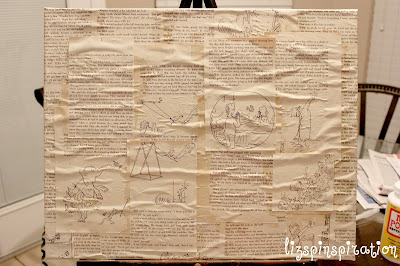 Even though these pages were already a bit aged, I decided to stain them. I loved the way the stain turned out! I used this stain,  Ranger TDW-29892 Tim Holtz Distress Stain Fluid Water-Based Dye, Vintage Photo, 1-Ounce

, which you can spray with water to create variations in the color. 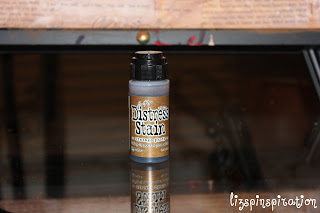 Now I had this to work with. 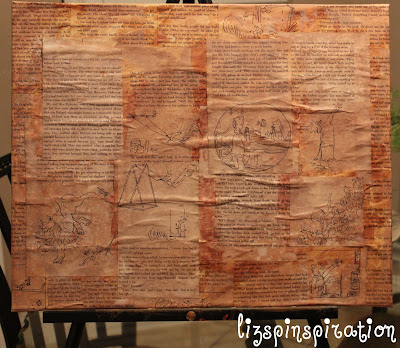 I know you are seeing all these wrinkles and thinking what a mess it looks now, but have you seen my post on the greatest mod podge trick ever??? Back at Pin 52 I learned what an asset the blow dryer is for mod podge projects.

Next step was to cut out all the letters. Y'all probably can guess by now that there is NO WAY I was going to measure and trace and precisely cut letters out for this. I flipped on the DVR and went freestyle with my letters. Guess where that ended me?? Well, they didn't quite fit the canvas in a way I was happy with. So I cut another entire alphabet. Alphabet number two was a bit too small. 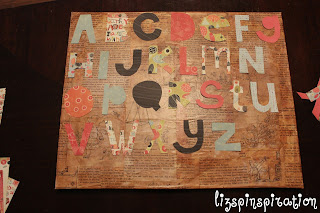 (This is sounding a little like a Goldilocks story. . . ) Alphabet number three was juuuussstt right.  Sorry, I couldn't resist. 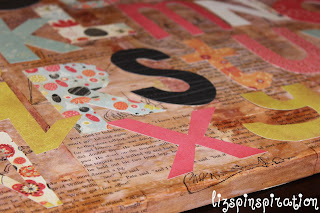 No, there was no alphabet three. I just mixed and matched letters from set one and set two to make it fit like I wanted. 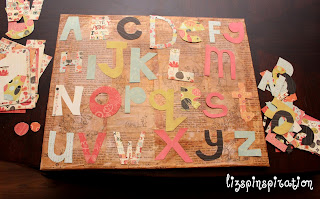 There was just one teensy, weensy problem left. You see, this illustrator, Quentin Blake, well I just love his work. I really wanted to make sure some of it was seen in the final result. And there was one picture I was particularly enamored with that I didn't want covered up. Letter spacing now became a problem. 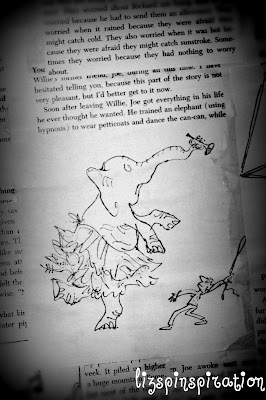 Luckily, I had this giant pile of letters from which to work and I was able to save most of this picture. I don't know why I liked it so much. I didn't actually even read the story so I'm not sure what is even going on here.

I skipped a part of the background story I wanted to tell you. . .

I love mixed media art. As a child, I would spend hours cutting up magazines and creating these gigantic collages of words and pictures I liked. They covered my doors and walls in my room. LITERALLY. Ask my sisters, I'm sure they remember. No magazine was safe in my house.

I knew when I started this that I would have to add other elements to the canvas besides the alphabet. I added a measuring tape cut. There were a few hits and misses here as well. Thankfully, I had extra book pages because I had to remove a few items I didn't like after they were in place. I decided to go with hand sewn buttons to complete the look. A few people were surprised that I had actually sewn them on, but since it was on canvas, it was a fairly easy endeavor.

Here is the final project. 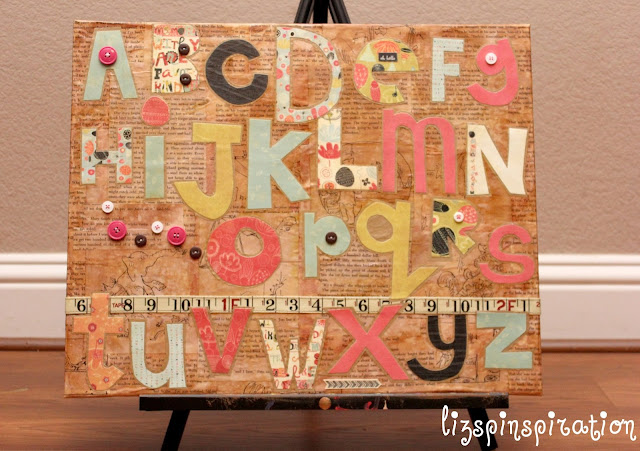 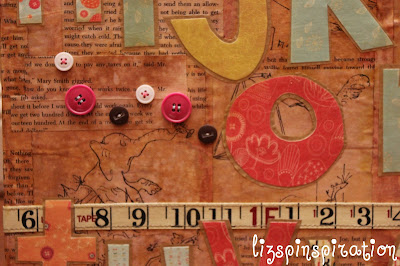 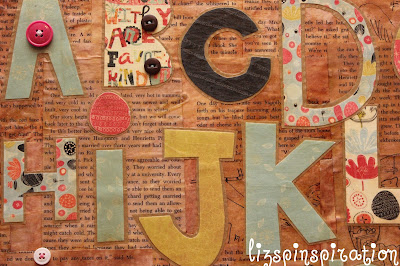 I have never sold an art piece before. I have only gifted one and it was to my mother a few years ago. Giving this away was a little humbling for me because, . . . well. . . .honestly?  I put a lot of time, and a lot of love into this. I made it the way I wanted it to be, and what if no one liked it?? I was fully prepared to buy it back for twice the cost of the materials. I just really, really, REALLY didn't want to hear anybody say anything bad about it. I loved it and might take a comment like that to heart.

Luckily, I didn't have to hear any comments about it. People were bidding on it at the auction so I didn't have to (or get to) buy it back. I hope it went to a good home and they love it like I do.

Total time: Hours and hours and hours. This time increased because I redid a few things. In all I worked on this for weeks. I would do a little something and then let it sit out and stare at it for a few days. There is a lot of pressure when you are making something for someone else! It sat on an easel in a high traffic part of my house so that I could walk by and contemplate it. My family helped me contemplate and make judgement calls on a few things.

Final verdict: I was a little emotionally wrapped up in this project, but not in an unhealthy way. I love the way it turned out, but was okay parting with it. I received a lot of compliments on it and it did have a few bidders. I tried to stay away from the bidding sheet because I was so emotionally tied to it. Bottom line is, it sold to someone who I hope loves it like I do. If I wanted to make one for myself, I could. I still have half of Willie the Squowse left and an entire alphabet set. Selling personal art is hard! No wonder so many artists aren't discovered until they are dead. They probably hide their stuff from prying eyes to protect their egos!