I was making some homemade tomato rice soup tonight for a couple of hungry boys and thought this bread from the Pioneer Woman would complement it nicely. As you may already know, I am a little obsessed with bread and bread making. I made a couple of loaves of my favorite bread last week and had stashed the leftovers in the freezer. (By the way, my current favorite bread recipe is a tweaked version of the one I featured in Pin 144. It was good in the original recipe, but I changed a few things and my family is obsessed with it now. We eat this bread at least once a week, if not more often.)

I cut back on the butter called for in the original recipe because I was using a rather small loaf--probably the perfect size for a footlong sandwich. 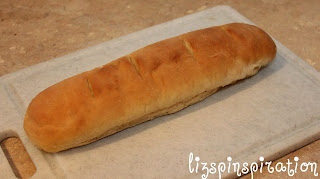 I used only 1/2 stick per loaf of butter but made sure it was adequately covered. It doesn't look like it in this picture because some of the butter was already melting. I had thawed the bread out in the oven while the rice and soup were cooking so the inside was already a little warm. I guarantee you, there was liberal amounts of butter spreading going on.

And into the oven it went. Waiting was the hard part. The Pioneer Woman said I must watch it every second once the broiler was on so I was a little tense that I would miss this perfect cooking time and my precious bread would be burned and wasted.
Approximately 7 minutes under the broiler gave me this deliciousness: 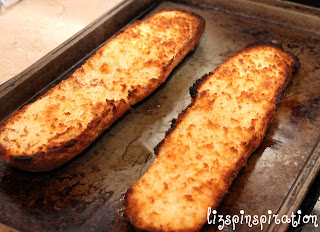 I did have Pioneer Woman's pictures handy to refer to when it came time to pull it out (or not pull it out). I could barely wait to cut off a piece and try it. It did not disappoint, it was tasty. Browned butter was a popular ingredient in one of my cooking magazines a while back, and this (not too surprisingly) tasted like browned butter--which is a good thing!  I love this bread plain, I love butter, what is not to love about this? It was a simple and quick alternative to plain bread. The toasting gave it a little stability which was absolutely perfect for scooping up my chunky tomato rice soup. The soft inside of the bread was still able to sop up the liquid part of the soup as well. I'm not going to admit to exactly how much I ate because then I'll have to deal with the reality of how much butter was consumed.

Total cost: $0--I always have butter on hand and the bread was in the freezer

Final verdict: Delicious! I will totally make this again. I could also see myself adding some flavors to it, maybe some garlic, rosemary, thyme. Although it is tasty enough on its own as well.