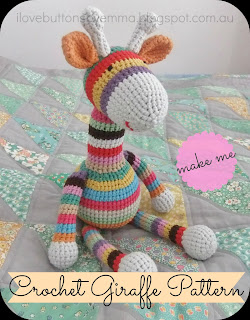 I just spent a recent ten days nursing sick children back to health. Confined to the house, I had to find a creative outlet that did not require me to drag any child with unpredictable behavior and unpredictable health out in public to pick up supplies. My little bird saw me flipping through my pinboards and picked this out for himself. While I still consider myself fairly new to crochet, I am really new to amigurumi. This is really only my second amigurumi project.

I was not interested in changing my yarn color quite that often (nor did I have all those colors on hand). I decided to just get started using what I already had in my stash and see where it takes me.

A while back, a certain craft store was running a special on 100% cotton skeins for $1 and I had picked up 10 or so with no real project in mind. I also did not have a small enough hook as called for in the project, so I just used the size recommended for the yarn I used. I ended up using two full skeins of the 100% cotton and then a leftover scrap from another project.

The original author mentions that a stitch difference here or there shouldn't make a difference and that she, too, is guilty of dropped stitches. I pretty much took this as permission to not count stitches too closely or bother ripping out mistakes. So some parts were a teensy lopsided, but it just adds charm. I worked on an off this for a week while the little bird stood close watch. He loves "giraffe-eeeeeeees" and already has a pretty tight attachment to two.

The pattern is simple and with the creative mistake license granted, it was just one of those projects that you fix and alter as you go along based on your experience with previous projects. (And as I stated before, this is only my second of this type, it didn't need just a whole lot of experience because it was not complicated).

So, in summary, I didn't use the right yarn, the right hook, follow the pattern too closely, or fix mistakes. Did I really even end up with the same project? Can I really judge this pin?? 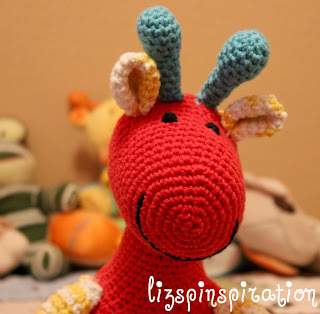 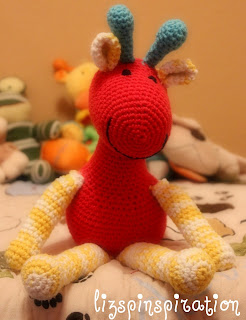 It is a giraffe, after all. My neck seems shorter, but I just kept making it longer until I ran out of that color of yarn. My arms and legs look fatter, but that could be stitch gauge (due to my larger yarn & hook) or because I used more stuffing. I think it looks pretty good for my second project. But really, the only judge who matters is this guy. Here is what he thinks of his new giraffe-eeeeeee. 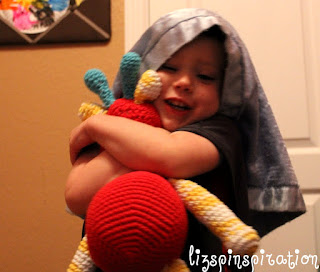 Total cost: Zero out of pocket. Otherwise, $2 for the two cotton skeins I bought months ago plus scrap yarn and leftover stuffing from another project.

Total time: I worked off and on for seven days to finish this up. I did have a little extra time on my hands being stuck at home with the sickys.

Final verdict: Not quite like the original, but it was relatively frustration-free and the little guy loves it with all his heart. That makes it priceless!